Let’s Distract Ourselves With the Intergalactic Hotties of the New Mass Effect: Andromeda Trailer

It’s time to meet the core team of heroes for BioWare’s upcoming Mass Effect game, Mass Effect: Andromeda. And by “meet the team,” I mean, “decide which of these super-cute space hunks you plan to romance.” You’ve got until March 21st to decide on that, and the competition is stiff, if you know what I mean.

Listen. Times are tough, okay? And we all need something to look forward to. Intergalactic hotties are my form of escapism, and I just hope you can all respect that.

So, here’s the lineup. At the center of it all, we’ve got a bland white dude hero up top, whose name is Ryder, and who will be gender-swappable (you can play as either Scott Ryder or Sara Ryder—they’re brother and sister). Also, they’ll be semi-customizable in terms of appearance, as per BioWare’s usual way. But what remains to be seen is how the rest of the teammates surrounding said hero might feel about them. Like, yes, Mass Effect: Andromeda is an action game in space and it’s probably going to have some interesting resource collection and battle mechanics, but it’s also going to be a very beautiful and expensive dating sim, and that’s important, too.

First up, I’d like to give a shout-out to the absolutely stunning haircut on this mysterious lady human on the team. I believe her name is Cora, since that’s the known name of your other human squad-mate. She’s got a gorgeous undercut with a blond fade on the sides, and based on the trailer, we already know she’s at least attracted to men, since she can be seen getting hot-n-heavy with Scott Ryder. (As for whether she’d be attracted to Sara Ryder, if the two of them ended up working together… we just don’t know yet.) Seriously, check out this bomb-ass haircut… plus, her killer deltoid muscles. #GOALS! 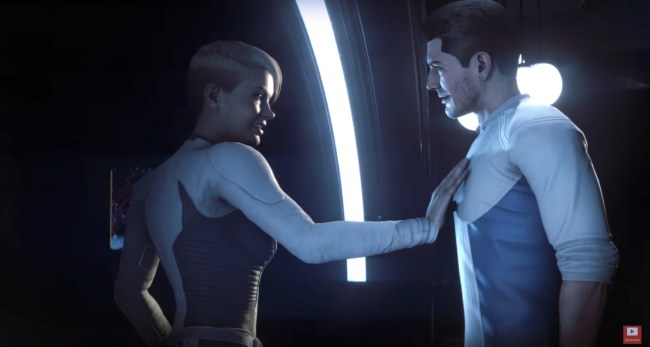 We’ve also got Peebee, an Asari with some seriously rad eye makeup. ME:A creative director Mac Walters told Game Informer: “She’s very bubbly… Her mind goes quickly as does her mouth. It’s hard keeping up with her.” Sounds like a fun date.

We also get to meet Vetra in this trailer, a female Turian. (Have I mentioned yet how cool it is that there’s a ton of ladies on the team? Because. It’s cool.) Again, we have no idea about romance options yet, but it is confirmed by Game Informer that she’ll have a loyalty mission in the game. She’ll also be way taller than you, because she’s a Turian, so. Heads up, if you’re into that.

There’s a Krogan on the team as well, bringing in the heavy-hitting. His name is Drack, and he will have a loyalty mission as well.

Last but certainly not least, there’s this young man, who I believe is named Liam. The reason I’m not totally sure is because Liam has had a couple of different visual designs that have popped up in marketing materials, but this guy appears to be the final design for the character: 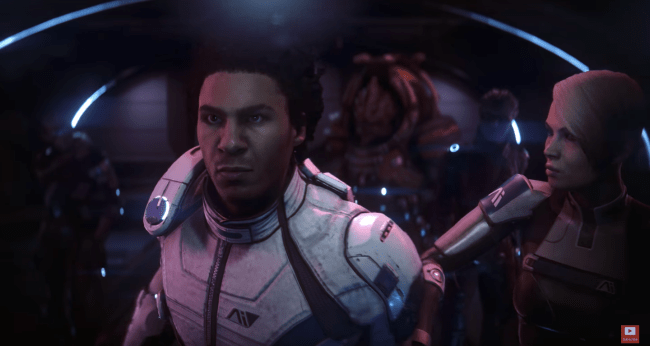 In the trailer up top, he’s the one who says “we’ve been waiting 600 years for this” at the end–and we can tell from his pronunciation in that line that he has a British accent. In his original design, he had a shaved head and his face looked a lot younger, but in this final design, he looks more mature and he’s got longer textured hair–which is really cool, because it means that maybe BioWare will be allowed for longer textured hair options in character select (!!!) as opposed to simply offering options like a shaved head or locs or braids. Readers, correct me if I’m forgetting anyone, but I think this might be the first time we’ve seen a character of color who has anything approaching a ‘fro in a BioWare game?

Oh, and by the way, there’s a new type of alien introduced in this trailer: the Angaran. They look rad. And, according to ME producer Michael Gamble, you can indeed smooch them:

Let us introduce you to the angara. pic.twitter.com/PnawwxaY5x

YAYYYYYYYYYYY. Bring on the intergalactic makeouts.