Marvel's Most Wanted Takes Mockingbird Away From S.H.I.E.L.D. | The Mary Sue

Marvel’s Most Wanted Brings Mockingbird and Hunter to the Forefront…and Away From S.H.I.E.L.D. 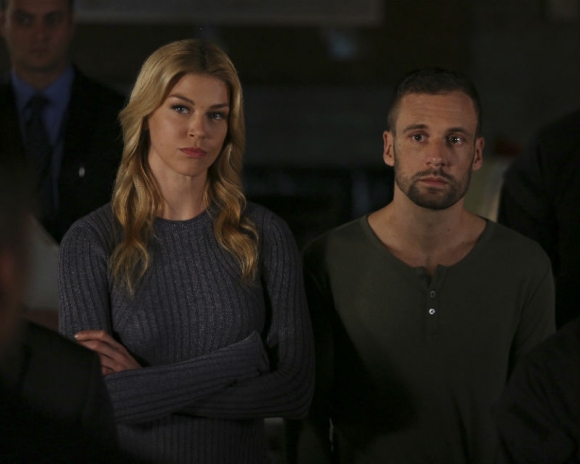 For a while now there’s been a will-they, won’t they element surrounding a Marvel show starring Adrianne Palicki’s Mockingbird and Nick Blood’s Lance Hunter. First they were doing one, then they weren’t, then they were and it was a “Mockingbird” show, then it was an  Agents of S.H.I.E.L.D. spin-off. So, what the hell is it exactly? Executive Producer Jeff Bell is trying to clear that up.

In an interview with Entertainment Weekly, Bell talks about his hopes for Marvel’s Most Wanted (which is too meta a title IMHO) – what it is, and what it is not. Namely, a S.H.I.E.L.D. show. We shouldn’t expect a show on which there’ll be cameos from the Agents of S.H.I.E.L.D. team every other episode. Bell says:

Part of what we’re hoping to do with Bobbi and Hunter in the new show is to stake out some new territory and not make it a S.H.I.E.L.D. show. It is not a S.H.I.E.L.D. show. It is not a S.H.I.E.L.D. spin-off. It’s a show about these two characters living their life and the adventures that they have together. If the door was too wide open, I think it begs too many questions of, ‘Well, why don’t they call Coulson every week for this?’ ‘Why didn’t these people come in?’ Not that we can’t hopefully find ways to tie things together, but you didn’t want to leave it with such a wide open door that it was a separate branch of S.H.I.E.L.D. doing other S.H.I.E.L.D. stuff, that would ask you why these other characters weren’t involved in the day-to-day episodes.

We’re trying to find our little corner of the sky. The Netflix shows have a certain feel and tone, Agent Carter had a certain feel and tone, and S.H.I.E.L.D. does, too. This is a show, at its heart, about a relationship. It’s about a man and a woman who love each other, who fight, who’ve been married, who got divorced, who are still together, and they also happen to be ex-spies who can kick ass. We’re looking to find a separate world for them in this larger universe, if that makes sense. Hopefully, tonally, you’ll look at it and it will have its own vibe.

So…it’s a spin-off. I mean, you’re taking two characters from one show and giving them their own show. That’s the textbook definition of a spin-off. And yet, I get what Bell is trying to say. It’s not an expansion of the world we know on Agents of S.H.I.E.L.D., or an examination of that world from a different point of view. It’s a different story in the same way as all things set in the shared Marvel Cinematic (and TV) Universe are. I mean, technically Coulson or Daisy could end up on an episode of Daredevil or Jessica Jones. They inhabit the same world. But Agents of S.H.I.E.L.D. and Daredevil are so successfully self-contained that they don’t need the gimmick of crossover.

That, and it’s probably easier to get a crossover from the Marvel films to Agents of S.H.I.E.L.D. (the way they did with Lady Sif) because Marvel Studios and ABC are both Disney companies, whereas Netflix is its own thing.

The point is, I think with a universe as broad as the MCU, terms like “spin-off” don’t mean the same thing they do when you’re talking about other shows. They’re all pretty much pre-spun-off.

I’m looking forward to this show, because I think Agents of S.H.I.E.L.D. has done a great job of building the relationship between Bobbi and Lance, and I love that they haven’t been afraid to keep that relationship messy. Not only messy, but unmarried, which is huge. It’s so interesting to me that they didn’t work out as a married couple, but they do much better loving each other as single people. That’s not something you see too often – a relationship where the end goal isn’t marriage. They’re like Been there, done that. Maybe there’s another way to live?

I’m looking forward to seeing how they do that when Marvel’s Most Wanted finally airs. Though that title’s still too meta for me.

(via Blastr, images via ABC)