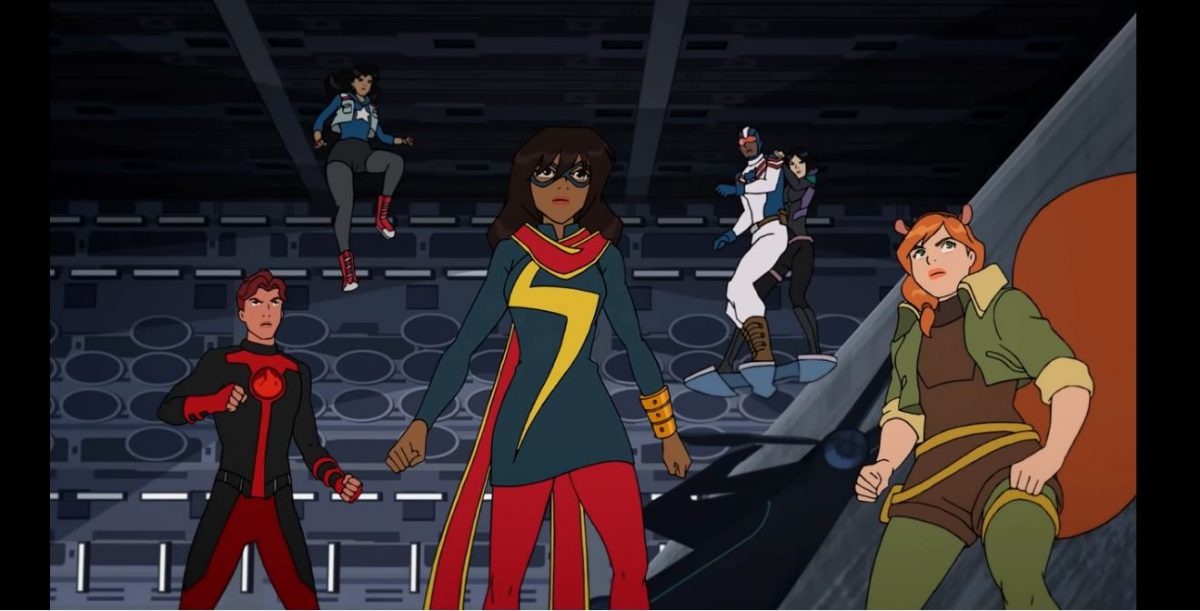 Is there any better counter-programming to this tire fire of a week than Marvel Rising: Secret Warriors? The animated film, which debuts on Disney Channel and Disney XD this Sunday, delivers on its promise as an entertaining, warm-hearted celebration of diversity and inclusion.

The film follows best friends Kamala Khan (Kathreen Khavari) and Doreen Green (Milana Vayntrub), who aspire to be superheroes like Captain Marvel. But the girls are still adjusting to their powers as Ms. Marvel and Squirrel Girl, as well as judgment from their classmates and parents.

Kathreen Khavari said of playing Kamala Khan, “It’s a huge honor to be able to do this, because I think it’s been a long time coming, I think it shouldn’t have taken this long, and I didn’t have that growing up, so it’s wonderful to see that, to be a part of influencing a whole generation to see superheroes as not just boys and men…there are female superheroes…that to me is a responsibility, but it’s the best responsibility I could ever have.”

The story of a young superhero struggling to understand and master their powers is not a new one (we’ve had nearly a dozen Spider-Man films covering this terrain), but seeing two girls (one a woman of color) navigating the experience is refreshingly original. The film is packed with powerful female characters, but the story is centered on the friendship between Kamala and Doreen. Kamala’s hesitancy and reserve make her a great foil for the upbeat and wildly optimistic Doreen.

Milana Vayntrub described the importance of that friendship, saying “I am who I am because of the women in my life, hands down, and any time that we spend competing and comparing is not only time wasted, its a step back, so I hope they sense that sisterhood and grow from it.”

The film doesn’t shy away from mature themes, using discrimination against inhumans as a metaphor for prejudice. While chasing down pyrokinetic teen Dante (Tyler Posey), the heroes debate the threat of inhumans, which drives a wedge between the inhuman Kamala and Doreen. All the heroes in Secret Warriors are struggling with feelings of otherness and alienation, but create a found family in each other once they team up under the guidance of Captain Marvel (Kim Raver).

There’s a lot to like here, especially the centering of female heroes in the story. Sana Amanat, the VP of content and character development at Marvel and executive producer of the film, said of the project, “I started out as a comic book editor, and I’ve seen such an evolution of women coming into comics, girls coming into comics with such fantastic female heroes, and we (Marvel) have always had such fantastic female heroes, and these are the ones that people just wanted more content for, and we got lucky enough, Marvel let us take these characters into the next phase. People have been waiting for this for quite some time.”