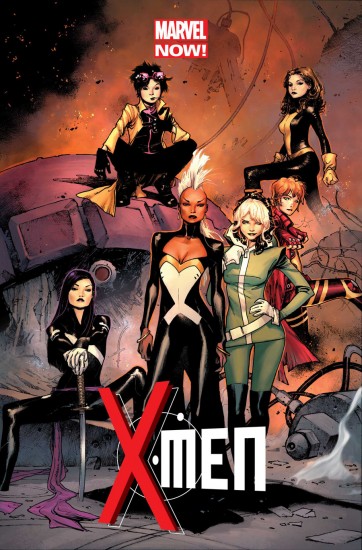 Today sees the release of Marvel Now!’s relaunched X-Men series, starring Jubilee, Storm, Rogue, Kitty Pryde, Rachel Grey, and Psylocke as an all-female X-team. I don’t think I need to tell you that we’ve had our eyes on this one for a while. We had the chance to speak with Marvel Editor Jeanine Schaefer about the new title: Its origins, its art, its characters, and how she dealt with some of the negative reactions to this groundbreaking new series.

The Mary Sue (TMS): How did the conversation start for this new book/team?

Jeanine Schaefer: When Brian Wood created his team for his run on X-Men last year, it was four women and Colossus. And it wasn’t designed that way, it’s just the characters he gravitated towards out of who was available, characters he thought would be fun to play with for the story he wanted to tell. And as he got deeper into it, we started talking about how you could do this with the X-Men, you could have a team that was mostly or all women and never have to make that a part of the book, or make it about being women, because they’re all X-Men.

When I mentioned the idea to Brian he had been thinking the exact same thing and already had a billion ideas and characters he wanted to play with. So we brought it to X-Men Senior Editor Nick Lowe and Editor in Chief Axel Alonso, and they were thrilled with it. Axel has been saying for a few years that we have a real dearth of female-driven books in our line-up and has been working hard to combat that, giving the editorial team the support and resources to make it happen. And you can see that in our current line-up: Captain Marvel, Journey Into Mystery, Fearless Defenders, Uncanny X-Force.

TMS: Was the fact that a lot of Marvel’s most famous female characters are X-Men, and that the team itself has a large female following, a factor in executing the idea?

Schaefer: For sure! That’s the thing—these women are already heavy hitters in the Marvel universe, and every X-Man is someone’s favorite, so the line-up just clicked into place. I think there’s a lurking fear that by doing something like this we might drive away the core readership (read: dudes). But the X-Men speak to so many people on so many different levels that I think a book like this is for that core readership [and will also] reach out to new readers.

TMS: Sometimes it seems there’s a bit of a disconnect between women who love superhero characters but don’t buy the books for whatever reason, be it the art, how the female characters are represented, etc.. Is that something you considered when putting together this book?

Schaefer: One of the things Brian is doing so well with this book is making sure each character has her own story going on that isn’t necessarily “lady problems,” which is, I think, one of the pieces that can be lacking in stories where women feel cheated out of female characters with agency. To be fair, it takes work, especially when the woman isn’t the hero of the story. But it’s in acknowledging that you need to take that extra step that things begin to change. Make sure all your characters are actual characters. Make sure all these women have personality, have agency, have actual motivation, have meaningful interaction with each other. Like in Breaking Bad, you’ve got a character in Skyler that I think a lot of viewers hated at first because she was perceived to be getting in Walt’s way. But as the seasons progressed the layers peeled back and you saw that she was the hero of her own story, a story that was happening right alongside Walt’s, we just couldn’t see it until now.

TMS: Can you talk to us a bit about the talent involved and why you think they were right for the job?

Schaefer: Not only does Brian write great women, he writes great people full stop, with real interior lives. And he writes awesome team books—I think what he does best really comes across when he lets his characters talk to each other, have real reactions to things. And on top of everything else, his action sequences are awesome! He’s got some fantastic ideas that feel very real when you read them, like you could be watching them in real life. Art-wise, Olivier Coipel is so perfect. I mean, he’s Olivier! Everything he draws has mass appeal. He draws women that everyone wants to look at (and/or be), his action sequences are huge (and a great match for Brian’s writing—he marries the fantastic with reality so seamlessly!), and his characters have so much personality and style. The level of detail in this book is astounding. There’s a sequence in the next issue in Beast’s lab that has so many tiny lines I felt like I was being hypnotized! I could go on. I’m gushing at this point.

TMS: An all-female team shouldn’t be a big deal, especially when you consider we’ve seen plenty of all-male teams, but it is to many people. What did you think of the initial reaction from fans when the news was revealed?

Schaefer: Honestly, most of it was so positive, and I was so psyched! And really, I don’t think anything could have burst my bubble, even if everyone hated it! [laughs] I was obsessively checking Tumblr to see what people were saying. I think I drove most of the hits that week on any Tumblr that so much as mentioned X-Men.

TMS: What did you think of the backlash, the segment of people who called an all-female team reverse sexism or pandering?

Schaefer: I was ready for it. I could have made up pre-printed bingo cards with words like “reverse-sexism,” “pandering,” “countdown to adding men to the line-up,” and “but it’s not okay to have an all-male team, I get it.” I think a lot of that is fear, though. Fear that a thing they love will be unrecognizably changed “now that women are reading it,” or that the safe space they built for themselves is being invaded. I’ve felt that way when a band I love goes mainstream, or when an actor I love gets popular, so I get it, and I try not to read real hostility in their words. But women already are reading comics, and these characters are already much-loved characters. I do think that once the book comes out and people see that this is an X-Men book through and through, a lot of those fears will be laid to rest. And then the next time an all-female team comes out the backlash will be a little less, and then a little less the time after that.

TMS: I know this might be getting ahead of things a bit, but are there any plans to expand the roster going forward?

Schaefer: Right now Brian’s roster is pretty solid. He’s got great stories in mind for all the women on the team, and I think adding to that would upset the balance he’s got going on. Of course, Pixie does keep popping up the background of pretty much every script he turns in, so. [laughs]

TMS: What’s your pitch to get people pre-ordering this title and picking it up every month?

Schaefer: Everything you want in an X-Men comic is right here: Huge ideas, heroes getting put through the wringer, break-ups, make-ups, giant robots, and tons of style.