Martin Shkreli Had His Bail Revoked, Is in Jail Now Because You Can’t Ask the Internet to Assault Hillary Clinton for You 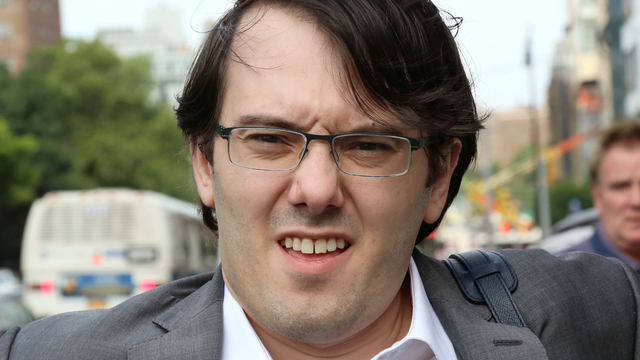 I’m only about 1/10 of the way through Hillary Clinton’s memoir, What Happened (I’m having to take frequent cry breaks), but I’m going to guess Martin Shkreli doesn’t get a mention. If Shkreli ever documents the events of his life, the reverse will most definitely not be true.

Shkreli’s had an eventful summer. After his trouble finding impartial jury members due to his generally awful demeanor, goblin face, and disrespect of the Wu Tang Clan, he was convicted of deceiving hedge fund investors. He was fired from two CEO positions and received a “no thank you” to a sizeable donation offer. He’s also been buying up domain names related to journalists who have criticized him and set them up with “mocking messages.” And let’s not ignore his pastime of harassing women from Lauren Duca to Hillary Clinton.

His harassment of Duca should have been considered a crime (if you ask, you know, basically anyone), but his targeting of Clinton, it turns out, actually was.

After Shkreli was convicted of a felony, and while he was awaiting sentencing, he wrote a (now deleted) Facebook post, offering $5,000 to anyone who would grab a hair from Hillary Clinton’s head on her now underway book tour.

Despite everything we know about Shkreli–his almost ludicrous lack of humanity, his inability to gauge any sense of his actions’ effect–it’s still amazing that he remains this unaware of his public perception. But as U.S. District Judge Kiyo Matsumoto said while revoking his $5 million bail bond, “The fact that he continues to remain unaware of the inappropriateness of his actions or words demonstrates to me that he may be creating ongoing risk to the community.”

I wish that I could dismiss Shkreli as wholly forgettable and unimportant, but I have to admit that his response to the decision haunts me. He told the court that he “never intended to cause alarm or promote any act of violence,” and that it was “never [his] intention” to appear “threatening.”

In his letter to the court, he wrote, “It never occurred to me that my awkward attempt at humor or satire would cause Mrs. Clinton or the Secret Service any distress.”

I honestly can’t decide if it’s more unsettling to believe these words, or to know they’re a lie. When Shkreli offers a literal bounty on Clinton’s head, or photoshops himself into Lauren Duca’s family photos, when any man harasses a woman on the internet or in person or in any form, when he fixates on her and demeans or threatens her–it’s never surprising to hear him say he had no idea that harassing or “trolling” or “playing devil’s advocate” would have an actual effect on her–a much deeper one than he ever imagined. But how disturbing is that? How do they really, honestly believe their harassment is just humor? That it doesn’t deeply damage anyone’s psyche, let alone put them in physical harm?

The best argument Shkreli’s attorney could offer was “He says things that are stupid. I don’t think stupid makes you violent.”

Except “stupid” with a large audience of ignorant, angry men and a cash offer can most definitely make others violent. And now “stupid” has gotten Shkreli sent to an actual maximum-security prison to await his sentencing in January.

Is it worse if he knows what he’s doing? Or is it worse that so many men are that far removed from the experiences of women (or any other marginalized group) that he’s legitimately surprised that there is a painful reaction, let alone actual consequences for his actions?