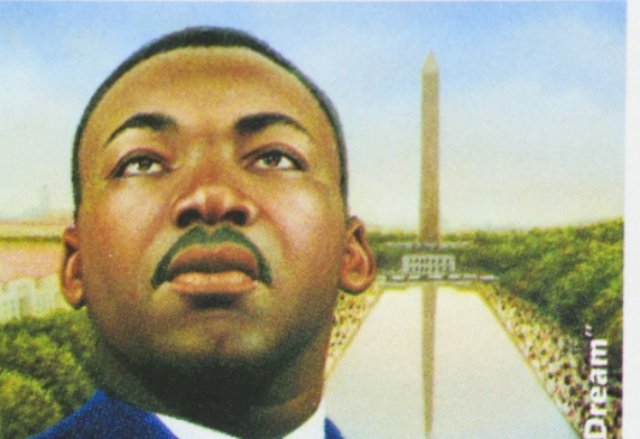 When I was younger, Martin Luther King Jr Day was like a preview for Black History Month. We were taught about King’s “I Have a Dream” speech, the March on Washington, and how he took his inspiration from Gandhi to pursue non-violent tactics towards Civil Disobedience. I was not taught that, in his time, King was seen as an extremist.

American History tends to mythologize its heroes to the point where it becomes blurry as to what was the actual truth about the men, women, and movements that helped shape this country. Martin Luther King Jr. has been used as the equivalent of rolling a D20 (D&D reference there) in discussions about groups like Black Lives Matter, The Black Panthers, or other Civil Rights leaders like Malcolm X. During the election, I would see Bernie supporters complain that black people who were voting for Hilary over Bernie were “choosing a Goldwater girl over someone who marched with MLK!!” They complain that groups like BLM should take a page out of King’s book and be softer, kinder, less aggressive movements. Which completely ignores that just because King was non-violent did not make the movement he founded unaggressive. Deciding to stand up for your rights, while allowing yourself to be brutalized without reciprocating violence is aggressive.

Let’s not forget that Martin Luther King Jr. was being watched by the FBI because since the dawn of time the thing our government feared was a genuine comradery between poor whites and minorities. In documents released from 1968, dated three weeks before King was assassinated, the analysis says that King was a “communist.” For 13-years, the FBI wire-tapped and put King under surveillance, with approval from JFK and J. Edgard Hoover started a campaign to undermine and “to uncover all the derogatory information he could about King.”

The reason they feared his potential communism was because, in addition to talking about racial equality, King was also looking to deal with issues of mass poverty and unemployment, not only for black but all poor people. “We call our demonstration a campaign for jobs and income because we feel that the economic question is the most crucial that black people, and poor people generally, are confronting.” In fact, the March on Washington’s official name was  “March on Washington for Jobs and Freedom,”

“We need an economic bill of rights. This would guarantee a job to all people who want to work and are able to work. It would mean creating certain public-service jobs. […] We must develop a federal program of public works, retraining, and jobs for all–so that none, white or black, will have cause to feel threatened. At the present time, thousands of jobs a week are disappearing in the wake of automation and other production efficiency techniques.”

However, that is not something we talk or learn about until much later in life, if, we decide to continue to learn American History at the higher academic level.

It wasn’t just the government that took issue with King, but also white pastors at the time. “Letter from Birmingham Jail” was a response to “A Call for Unity” a statement written by eight white Alabama clergymen against King and his methods. The same types of pastors who today will be celebrating King for his faith. Meanwhile, it was liberal Christians, Jews, and Unitarians who marched with King, while white Southern Evangelical Christians, who let us not forget became politicized because of their stance on keeping segregation, “ were overwhelmingly opposed to the civil rights movement.”

There is also power in trying to re-write history to create a dichotomy where on the one side there is Martin Luther King Jr. Noble Peace Prize Winner and non-violent advocate vs the militant, angry, no-holiday-having Black Panthers and Malcolm X. I remember hearing my teacher, when I was younger, make the argument that The Black Panthers were the black equivalent of the KKK and for many years I believed it because I trusted my teachers. Malcolm X was taught to us, but Malcolm X was the “dark horse” a leader who was respected and equally charismatic, but too militant in comparison with King. King was the good one.

But that, quite frankly, is all horseshit and only serves as a way to not only reduce people and movements into soundbites but also alienate people from learning about what these men and movements stood for. I did not read The Autobiography of Malcolm X until I was 22-years-old. It had never been assigned to me in classes and I figured that I was in grad school, I should read about this important man who I knew little about. I realized just within the first few pages that I knew so little about Malcolm X.

I hadn’t realized from the black and white pictures that I’d seen that he was a very light-skinned man with reddish hair. I hadn’t realized that his father had been murdered by white supremacists, that he’d been involved with sex work, that while he had joined the Nation and adopted their principles, he became disillusioned by it later in life and started to speak about unity between the races. I realized reading that book that I had been taught to delegitimize X’s anger, his pain, and trauma. We were all taught that his racial extremism was wrong, but we are not taught that it was a response to white racial extremism.

The Black Panthers, which I had been taught to believe were the black equivalent of the KKK, were not a racial supremacy group, but a Marxist revolutionary group:

The food program that the Panthers opened up gave food to poor white and black children who needed. The total opposite of a racial supremacist group. In fact, it was because the Black Panthers did have allies within other white Marxist circles that they were seen as so dangerous by the FBI and why the government began to kill off their leaders.

Sometimes I wonder if Dr. King had not been assassinated would we, as a nation still love him? Or would he, like some other Civil Rights leaders who are alive today, but sometimes maligned or made into a joke? Is the legacy of a great man who was gone too soon more important than a living one who still has time to grow and make mistakes?

I bring this up not to take away from Martin Luther King Jr., but to remind people that the one thing King would not want to be is a tool used to divide black people and a prop for white politicians or white moderates to throw around. What I have learned to remember about King is not only all the amazing things about his legacy but a reminder that there is no right way to advocate for your freedom.