Martin Luther King Jr. Made a Surprise Appearance in Fortnite & We Have Mixed Feelings About It 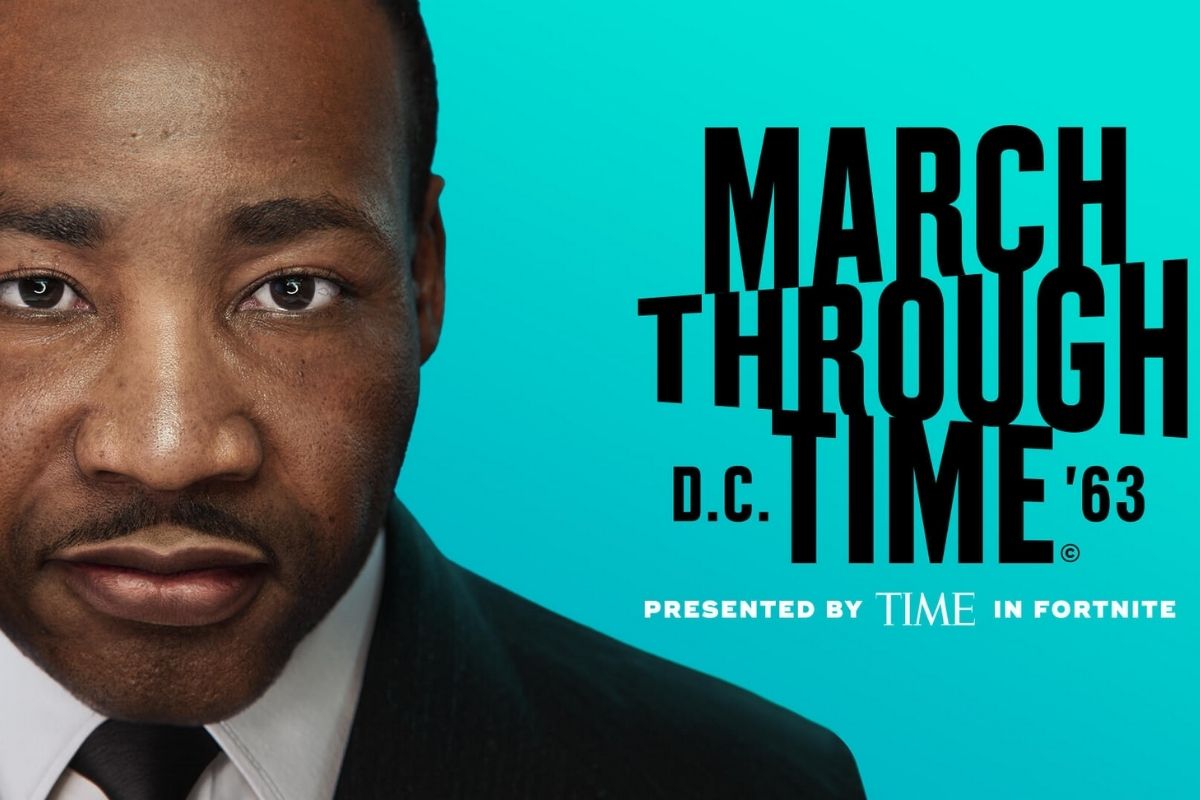 The actual news, while still troubling in its own way, is more nuanced than that disaster—a disaster, might I add, that is only believable in a post-2020 summer when the way big companies choose to engage with Black liberation is usually extremely superficial.

So what is actually going on?

So what is actually going on with the Civil Rights icon and the video game giant? Well, Fortnite built a custom play arena (only available in Creative Mode) resembling the Lincoln Memorial, where users can listen to MLK Jr.’s speech and complete challenges to the theme of his message, with in-game cosmetic items as a reward. The Lincoln Memorial was the site of MLK Jr.’s “I Have a Dream” speech during the historic “March on Washington for Jobs and Freedom” on August 28, 1963.

On the announcement blog for March Through Time, The Fortnite Team writes, “Inspired by the work of TIME and their partners — JuVee Productions, Digital Domain, V.A.L.I.S.studio and Ryot — March Through Time would not have been possible without the contributions of American Family Insurance, the DuSable Museum of African American History, and the Estate of Martin Luther King, Jr.” The Martin Luther King Jr. Center and their CEO, Bernice King (also King’s youngest child), both publicly clarified that they had nothing to do with this project.

Decisions around licensing my father’s intellectual property are outside of my personal purview. https://t.co/Qr1iztjG0h

Players are not expected to watch the 20-minute video. Instead, they are encouraged to work together in completing 10 challenges (5 flanking each side of the reflection pool). No matter where they are in the small map (indoors or outdoors), MLK Jr.’s voice carries. Completing the challenge will earn them a D.C. ’63 spray for their in-game locker.

The challenges range in difficulty, and while a handful of them can be completed alone, several will need one to three of the other people present in your play session. Some challenges are more video game-like and symbolic (like climbing the pillars of justice), while others are straight up trivia about Civil Rights. At the end of each puzzle, players are transported into a room with a part of Civil Rights history. These surprise locations are related to the Student Non-violent Coordinating Committee (SNCC), Ruby Bridges, Rosa Parks, and more.

After players (collectively) beat the challenges and return the “light” to the in-game monument on the other side of the pool, the game prompts them to share #FNDC63 on multiple social media platforms, with a screenshot of the lights on the board, and tell the world how your voice can make a positive impact. I didn’t get that far on my attempt because people left the in-game lobby I was in and we couldn’t complete all the challenges, but others have followed the instructions.

#FNDC63 that creative map was amazing! It was so inspiring and I absolutely loved it. I can use my voice to stop anyone from feeling like they cant speak out because they can! Thank you for such an amazing and inspiring addition to fortnite! pic.twitter.com/I0EbPZlCkM

#FNDC63 @FortniteGame i couldnt complete it due to people leaving but i hope my voice and light make it bright enuogh that we all should listen to each other and should stop fighting each other and instead help each other for the good of humanity and i and we all HAVE A DREAM! pic.twitter.com/qPJ0EYSXcN

Before I remembered that this was a video game on the internet, I thought it would be beneficial to have a chat feature or mics allowed so that I could get people to meet me at the team challenges. However, the devs probably understood that any such feature (like in all online games) would be abused. Thankfully, only person allowed to say “negro” in the lobby was MLK Jr. during his speech.

The lack of mics didn’t prevent people from disrespecting the legacy and story TIMEs and Fortnite were trying to convey. The game’s emotes—brief, expressive actions players can make their characters perform—and dances were left enabled, so there were people making their characters dance in front of the reverend while he was speaking. The shtick got old because, at least in my game, many left to explore the National Mall and play educational-ish puzzles.

Okay NOW I’m irritated. Literally they could have had it if they deactivated certain emotes/emotes in general.

This ain’t it Fortnite. https://t.co/jIZVKmHIzA

Soon after this mode was announced, beyond the memes, the conversation around the dance feature in Fortnite began again.

Someone giving lapdances at the MLK event in Fortnite 😭😭😭 pic.twitter.com/macDsBZ1Fb

Its kinda fucked that this is associated with Fortnight, a game that steals from black creatives, rakes in billions and can’t be assed to even attempt to pay royalties. https://t.co/6DS3d3Z1Kk

Several of the more iconic dances from Fortnite were made by Black creators online or Black stars. For example, 2 Milly’s “Milly Rock” is copied in the game under the name “Swipe It.” Alongside Milly, dances were stolen from Black characters in shows like Scrubs (where Donald Faison’s dance is called “Dance Moves”) and The Fresh Prince of Bel-Air (where Alfonso Ribeiro’s “Carlton Dance” is renamed “Fresh”).

Milly filed a lawsuit against Fortnite developer Epic Games in 2018 over the theft (alongside Ribeiro and others like the “Backpack Kid”). However, they all dropped it after a Supreme Court decision in an unrelated case basically stated that before a case can be brought, the copyright registration must be complete.

Dances are notoriously hard to get approved for copyright. Ribeiro tried to get the Carlton under his protection before, but was told it was “too simple.” The game NBA 2K16 also used his dance. Dancers have a better shot at getting their copyright approved if it is full choreography, like creator of the “Savage” dance, Keare Wilson, recently received. Again, this was only after the backlash and attention brought to her being overlooked by white creators capitalizing on the dance’s success.

If it weren’t bad enough that kids are just calling these dances “The Fortnite Dance” (I have seen this IRL and online on multiple occasions), Epic Games is profiting off of it. Many of these dances are purchased individually through in-game transactions or are only available by purchasing each season’s Battle Pass. Just because the legal argument is weak and copyright laws are outdated, that doesn’t mean Epic Games should walk over creators.

It doesn’t matter how many Black history events the company wants to highlight through Fortnite or any other game. Stealing from Black artists (and white ones like Backpack Kid) will not be forgotten, and to many, this feels like a way to try to paper over that without actually taking real, monetary steps to rectify the situation.

I think Rick Sanchez and the xenomorph from Alien learned something today, and have been given a lot to reflect on. pic.twitter.com/ja4oHwkA0U

In my time playing, the dancing was limited. However, there were a lot of people using the new “protest” emote (seen in the tweet above) … sigh. I get why they did this, but also, this seems really performative. Sure, the sharing how you will change the world to social media is, too, but at least that involves engaging with others. People holding the protest sign was very cringey to see in game. The use of this protest sign, which just reads “dream” under a modified logo from the actual event, reads like a certain Pepsi ad.

Many were quick to ruefully point out that with the latest rightwing culture war craze, in which conservatives are removing school requirements to teach the texts of MLK and that the KKK were the bad guys (this is more than a Texas problem), this attempt by Fortnite might be the first time that younger children engage with the reverend or The March on Washington for Jobs and Freedom. This is uncomfortable, but a real possibility.

Kids in school bout to start recognizing MLK as “the guy from Fortnite” pic.twitter.com/OAJObqCUYM

Initially, this made me want to bang my head on the wall, but honestly, we have all learned a critical part of history from a video game, book, or movie before being formally introduced to it (if ever). No matter how we may feel about the corporate nature of all this, that may exist alongside some actual positive impact and the possible encouragement of (probably a very small percentage of) players to go learn more. However, of the tens of millions of active players, many are children, and we can’t expect a self-guided video game to provide adequate nuance or make up for our society’s issues.

I am especially interested in seeing if this is part of a larger project and not a one-off to score public image points. Other “march” moments could be recreated alongside anti-racism educators and historians—maybe some regarding the United Farm Workers, #NoDAPL demonstrations, or the 1913 Suffragette March. The Museum Studies person in me finds this similar to the interactive ways those institutions are trying to do outreach and connect to a younger audience. This has caused a big rift in the field, but as a gamer myself, I welcome it.

In addition to the in-game museum tasks, Time Magazine is hosting an interactive exhibit on their website as part of the team-up with Epic Games. There is a six-minute video overlaying sections of the “I Have A Dream” speech with contemporary footage (like the protest last summer of George Floyd and Breonna Taylor) and Black activists speaking some of the lines. These people include BLM co-founder Alicia Garza, trans rights icon Laverne Cox, writer Baratunde Thurston, EJI founder Bryan Stevenson, playwright Claudia Rankine, and basketball player Candace Parker.

After the video, there is an interactive “Ask Joyce Ladner” AI. Ladner was 19 when she helped organize and then attend the ‘63 march. She went on to become a sociologist, writer, and president of Howard University (a historically Black college). Using your microphone or keyboard, you can ask her various questions about the Civil Rights movement.

I asked some hardball questions about those in opposition to the nonviolent approach (like the Black Panthers) and what it meant to be Black at that time. Lander’s AI answered pretty well. It is kind of eerie, but still very cool technology. She talked more broadly about the march and the moment rather than MLK Jr. himself.

Maybe (likely) I am being overly optimistic about all of this. Regardless of the possible positive effects, the emotes and dances must be disabled from this mode, and this feature doesn’t absolve Fortnight of the continued theft of Black art.