This just in: There are balls on Ma—wait. Phrasing.

Proof that aliens also enjoy terribly boring games like golf or whatever. pic.twitter.com/x1jXRwsZwQ

Seriously, Mars? We send 1,982 pounds and $2.5 billion of science up there, and you just throw out a ball and try to play fetch with it like a dog? I mean, I guess that’s better than vaporizing it on sight, but come on. Have some respect.

Actually, the ball in this recent picture from the Curiosity rover is tiny and most likely not put there by aliens. Despite appearing to be about the size of a tennis ball due to lack of objects that give a sense of scale, it’s only about a centimeter across. Its perfectly round shape has stirred some interest, but it’s likely that the ball is a form of “concretion.”

Back in 2004, the Opportunity rover spotted little Martian “blueberries” on the Red Planet. 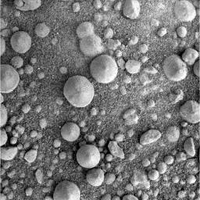 These were likely formed by sedimentary rock formation when Mars had more water hazards and wasn’t so much one giant sand trap—sorry. Still daydreaming of golfing aliens on Mars. I’m just excited that I finally found a reason to be interested in a sport.

As on Earth, the sedimentary rocks on Mars were formed by minerals deposited by ancient waters. Pores form in the rock that fill up with harder, more erosion-resistant mineral deposits, and when the rock erodes away, these concretions are left behind in unique shapes. The Gale Crater where Curiosity landed is an ancient lakebed, so this kind of oddly shaped rock isn’t really out of place.