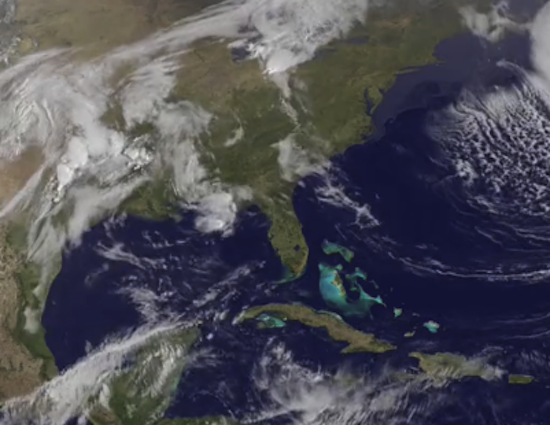 The intense storm system that ravaged Texas earlier in the week, dropping a reported 15 tornadoes before finally dissipating, shocked viewers across the country as incredible footage of the storms dominated news coverage. Scienistists at the National Oceanica and Atmospheric Administration were watching too, and have released a video of the storms as seen from space using data from their Geostationary Operational Environmental Satellite 13 (GOES 13).

The video begins at 4:15 P.M. on April 2nd and runs until April 4th at the same time. The storms begin to form on April 3rd. To create the video, NOAA used the infared and visible light data showing the swirling clouds over the region and placed that imagery over a view of the land from NASA satellites.

In the video, the tornado producing storms form a bright white wedge on the left side of the screen, which coalesce and then move southward towards the Gulf of Mexico. This wedge-shaped pattern is apparently indicative of the extreme storms which produce tornadoes. NASA says that they hope by releasing the video, people can better prepare themselves for intense storms by knowing what to look for.

One thing people viewing the video can take from the satellite view is that if they’re seeing GOES imagery live on television, they can relate wedge shaped-frontal clouds with severe weather and be prepared.