Mark Hamill Talks About Star Wars: The Force Awakens, Being Maybe Spied On By Drones 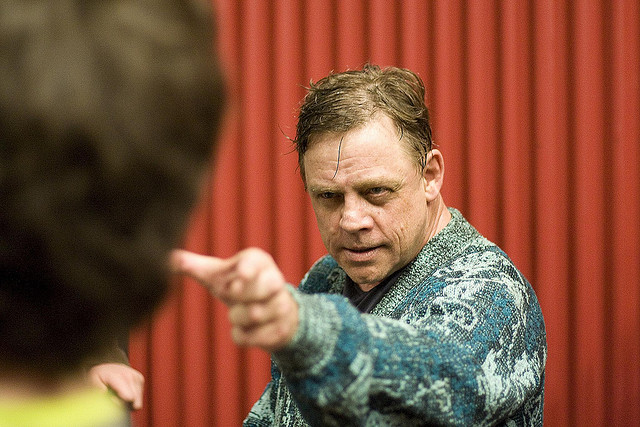 You’d think Mark Hamill would be more accustomed than most actors to the level of security that it takes to keep something from the Star Wars movies from leaking—remember how he was only one of a handful of people who knew Darth Vader was Luke’s dad? But things have changed since then. Heck, now you’ve gotta to worry about the nearest equivalent we have to droids actually coming in and snooping on your filming.

In an interview with Hero Complex for the LA Times, Hamill discussed his upcoming role in Mark Millar’s Kingsman: The Secret Service, his reprisal of The Trickster on CW’s The Flash, and, of course, his return to the Star Wars franchise with The Force Awakens. While he’s excited to see positive reactions from the fans, he’s also pretty ambivalent about the whole thing in general—although, if they’d start referring to actors getting typecast in scifi and fantasy as contracting the curse of YOU, I  bet you’d be pretty “meh” about it too:

Occasionally you’ll meet fans that feel the way I did when I met George Harrison. You just feel like if you open your mouth you’re going to lose it. You’re re-reminded of the impact that it had on some people. It had a beginning, a middle and an end for me. It was nice, but it was over. I didn’t have a problem with the prequels because it was like they’re playing with my toys but I’m not in the rec room anymore. I’ve moved out of the house. I didn’t feel possessive of it in any way, shape or form. The same when they were planning this third set of stories. I would have been completely OK with it not including us, but I do think having the original cast members there gives it a sense of continuity and scope. But mind you, it’s really about the new generation, it’s not about us.

“It’s exciting from the standpoint that it’s the first of the movies in that universe that’s conceived and directed by the fan generation,” he also noted. “We’ve never had that before. Now, Larry Kasdan is one of the old-timers like us, but the captain of the ship is J.J. Abrams and he was a fan of the series, which I find very interesting. They’re going to have an input into how things are done in a way that was impossible in the more autonomous period of George’s [Lucas] reign.”

But how how surreal it was to once again take on the mantle of Luke Skywalker? Ridiculously so, Hamill said, once again trying to downplay the media and the fans’ collective pants-shitting over the new films:

Oh, my God! It’s just crazy town. First of all, the security. We had problems before with people leaking stuff, but I was saying to them, “Is it really necessary to put on this giant robe with a hood that hangs down to your chest to go from my trailer to the soundstage?” They said, “Drones.” I said, “You’re kidding! Really?”… I wish people would just relax. We’re not trying to play games with people. We just want to maximize their experience at the movies where it should be seen and not have it leaked over the Internet. Believe me, it will be here before you know it.

“Forget about it, that’s my advice,” he added. “Look forward to all the summer movies. I’m telling you, it’s just a movie. These people that build it up in their minds like it’s going to be the second coming of, I don’t know what [Of Luke Skywalker, duh]— they’re bound to be disappointed.”

(via LA Times, image via Bryan)