Mark Hamill Talks Getting Back Into the Star Wars Saddle, Shows Off His Episode VII Facial Hair 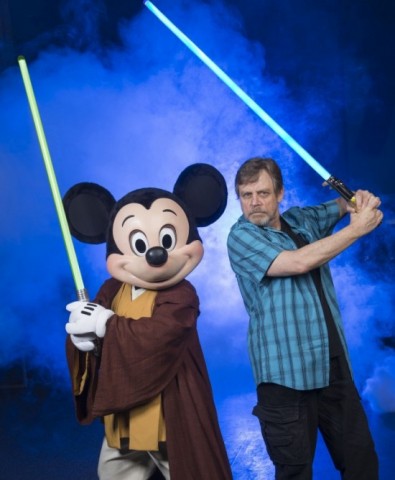 I know that’s been the question on my mind: Will Episode VII Luke Skywalker have abandoned the beardless side of the Force to go down a path of righteous follicular majesty? The answer appears to be yes, at least judging by Mark Hamill‘s appearance in this promotional image for Disney World’s Star Wars Weekends, which was taken on a break from Episode VII filming. Behind the cut, Hamill speaks about his preparation for the role, his relationship with Star Wars fans, and how the sequel trilogy’s attitude towards spoilers differs from that of the original trilogy.

Said Hamill to the Orlando Sentinel (warning for autoplay video at the link): “I’ve altered my diet. I’ve started working out. There’s that. But on the film itself: I toured the departments, I’ve looked at wardrobe, and I saw the creature shop. I went around and met all the cast people, saw the technicians working on some new things.” And, of course, he grew the Obi-Beard. For Hamill, there was never any question that he’d don the Jedi robes one more time:

“Look, I’m aware that a lot of people don’t care one way or another, but for the UPFs – the ultra passionate fans – they would come after me like the angry townspeople with torches in the old Frankenstein pictures. I would have a lot to answer for if I didn’t at least try to make the effort. It’s not like I had a choice. I feel like I was called up for service by the Selective Service…I am surprised sometimes at how vehemently [superfans] get if they’re not satisfied, which is scary. I have this feeling that no matter what we do there’s going to be a faction that really is disappointed. You just can’t live up to that. Any kind of reunion type endeavor, whatever it is… you can never go home again.”

Shoot, guys. Everyone be nice to Mark Hamill. First off, he seems really nice, and he’s genuinely excited about being in the new trilogy (On reuniting with old castmates: “It’s like getting out that pair of pants you haven’t worn in five years and finding a 20-dollar bill in the pocket. Oh, this is nice.”). Secondly, he’s the Joker, and I’m pretty sure you don’t want to mess with the Joker.

As for spoilers, J.J. Abrams already Tweeted a request not to leak set pics along with a tongue-in-cheek Millennium Falcon joke (and look, I know people are still smarting at the Khan secrecy thing, but “please don’t leak set pics” is not an outrageous, “I won’t tell you who this character is!”-level demand). Now Hamill addresses the issue of spoilers, too, saying:

“This is a whole different world… The first one, no one cared. The second one there was a lot of interest, but it was before the Internet… I tell people we’re not trying to annoy you or tease you or play some massive game. Basically what the goal is to keep the surprises for the movie instead of spoiling them on the Internet.”

Emphasis mine. Trust in your lord and savior Mark Hamill. We love him, and he loves us, too. Here’s him talking about his relationship with Star Wars fans at Star Wars Weekend:

May the Force be with him.