Marine Will Be Reunited With Her Canine Companion | The Mary Sue 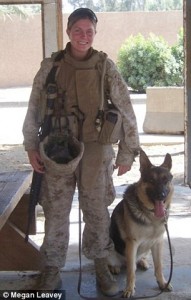 Back in 2006, former Marine Cpl. Megan Leavey was serving in Ramadi, Iraq when she was injured by a blast from an improvised explosive device. By her side was a military work dog, a German shepherd named Rex, with whom Leavey had formed a true bond. Such dogs don’t actually have owners, and Leavey soon filed for the right to adopt Rex. Letters were written to high-ranking officers, a petition circulated the nation, and now Leavey will be able to bring Rex home with her.

After an honorable career as a military dog, Rex had reached the ripe old dog age of 10 years old. Because he could no longer serve, there were plans to put Rex to sleep. But Leavey, who worked with Rex to search for IEDs before one of them injured her, didn’t want to see that happen. She felt that the dog deserved to live out the rest of his days in a loving home, and who better to spend it with than a fellow soldier?

While adopting military work dogs is not against Marine rules, it’s not exactly a priority. However, 10 years old is considered “pretty up there” in dog years, and Rex was running out of time. Leavey’s campaign spread fast, with 20,000 people signing the petition, and New York Senator Chuck Schumer worked with her to cut through the red tape and get Rex into her home.

Back in 2007, after Leavey had recovered from her injuries (concussion, burst blood vessels in her ears), was when she first tried to adopt Rex. But at the time, Rex was still fit to serve, so the Marines kept him in their employ. Her adoption requests were denied. Then, earlier this year, Leavey found out that Rex was showing signs of his age. However, the dog was still considered a “fierce” animal, and possibly not fit for adoption. But Leavey was convinced that she’d provide a good home for her former companion, and she reached out to Sen. Schumer, who lobbied on her behalf. Rex’s handler, Mike Dowling, who wrote about Rex in his book Sergeant Rex, also supported the adoption.

And now, in just a matter of days, Leavey and Rex will be reunited. President of the New York Yankees Randy Levine and his wife Mindy will be paying for Leavey’s travel expenses (Rex is currently in California, Leavey is in New York) and will help cover Rex’s medical bills.

And there is your feel-good story of the day, complete with puppy adoption.

(via LoHud.com, One Marine’s View)

Chuck Schumerdogswomen in the military