The Thrilling Conclusion to the Marie Callender’s Burnt Pie Saga Is the Warm, Snarky Christmas Moment We Deserve 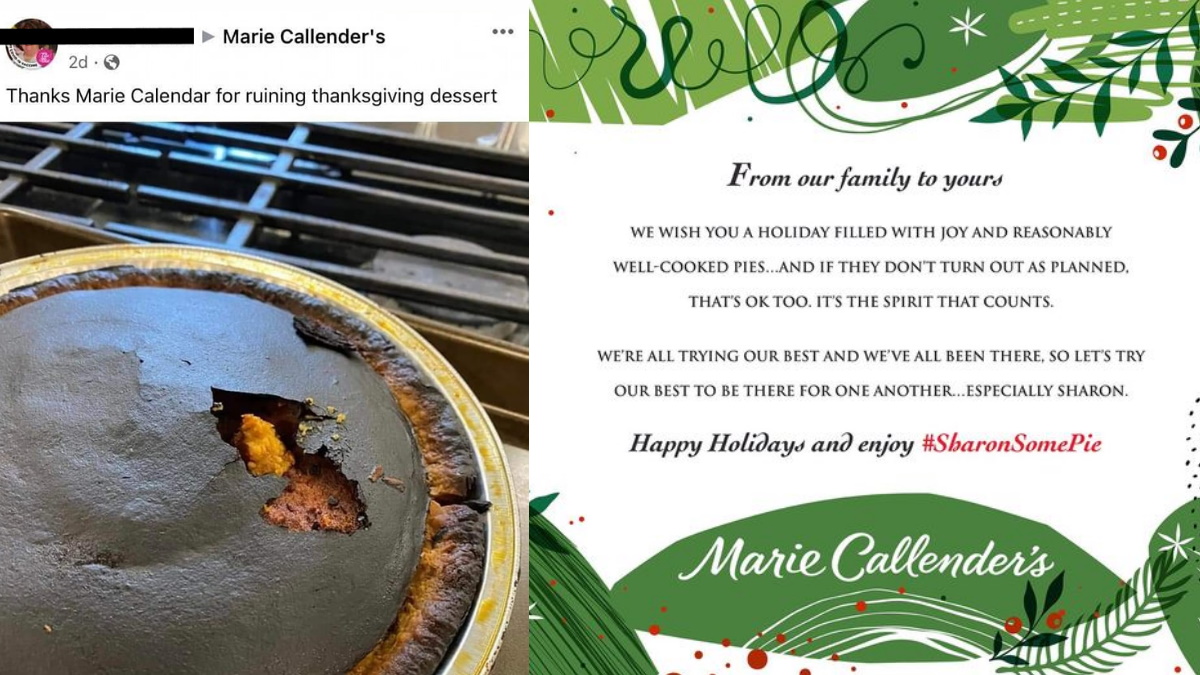 Back when we were all focused on crafting the perfect Thanksgiving feast (not me, because I had the pleasure of going to someone else’s house), a story about a dissatisfied woman and her charcoal dusted pie circulated the Internet. When I first reported the story, I took some form of pity on the woman by crossing out her name, but now that she’s starring in her own Christmas fueled hashtag I guess I can call her Sharon.

Sharon bought a Marie Callender’s Pumpkin Pie for the holidays, and I can’t blame her, because I definitely do NOT want to be trying to bake anything for scratch for any occasion. Unfortunately, the pie came out a tad bit, shall we say, asphalty, but that sort of thing can happen in the kitchen.

However, Sharon took it upon herself to BLAME Marie Callender’s for… providing a frozen pie? 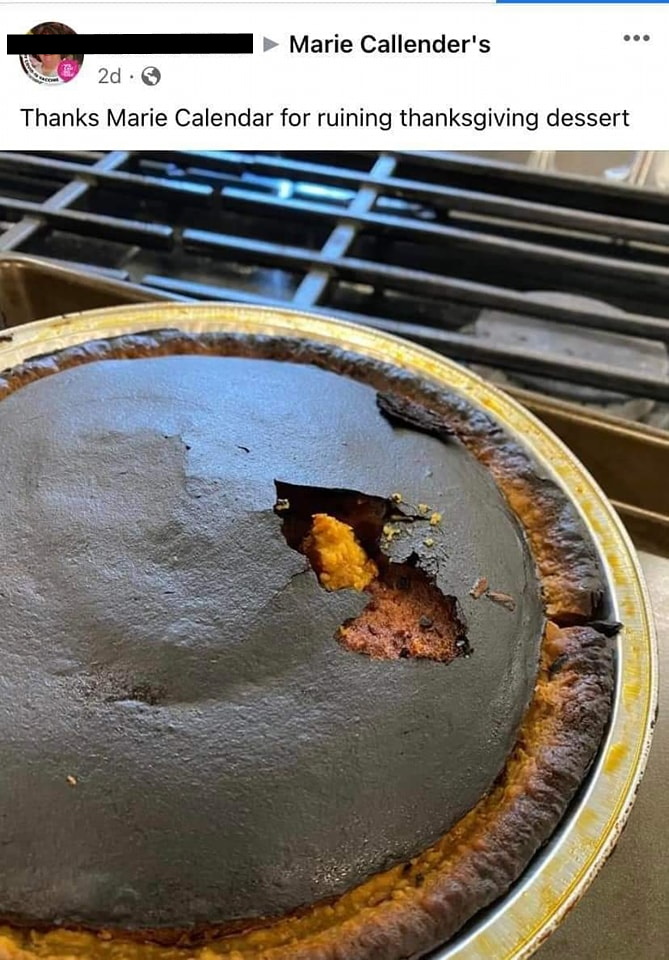 Marie Callender’s being the kind soul that they are (which roughly translates to “overworked customer service person trying to put out a fire that only exists in Sharon’s oven”) responded to Sharon’s claim of them being at fault in a way that made the entire Internet scream, “This ain’t your fault, Marie!” 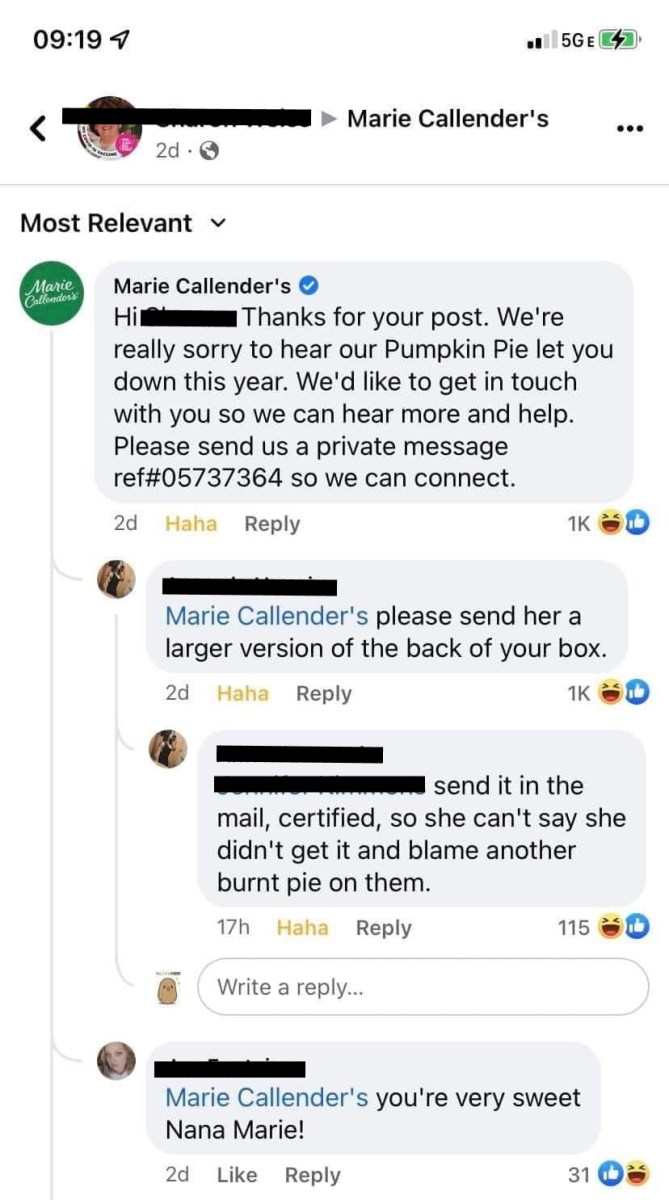 The memes were relentless, the comments finding multiple ways to drag Sharon, or worse, force her to eat her own pie. Even I found a way to reference an old 90s disaster movie because I’m not all that clever when it comes to savagery, but I can try!

Obviously, Marie Callender’s already did their part by having the frozen pie available, it’s up to us to cook it in a way that doesn’t make it look like a pie sample from Dante’s Peak. Let me preface that by saying that I normally sympathize with cooking failures in the kitchen (especially desserts), but that sympathy vanishes when I see posts like this one.

Throughout all of the memes and takedowns, there was another message running alongside them: Marie Callender’s really needed to take advantage of the situation in a way that propelled their social media. If you look at their Facebook page (where this whole thing started), they hadn’t made any official posts since 2020! Understandable, really, considering what happened in 2020 and how it’s still very much an issue today. Of course, they’ve had plenty of Community posts, especially because of Sharon, but they hadn’t had a post of their own in over a year.

I’m happy to report that not only has Marie Callender’s updated their social media, but they have also embraced Sharon in a way that will bring us all joy this Christmas.

I have to say, the hashtag is perfect, as it includes Sharon in such a wholesome way (sharing is caring, as they say). I also applaud them for encouraging us all to have “reasonably well-cooked pies” this year, and hey, if it doesn’t work out, that’s a-ok! It’s the spirit (and the sense to have a backup dessert just in case) that counts.

Honestly, Marie Callender’s is right. We all ARE trying our best, in cooking and in life. I can’t think of anyone who hasn’t messed up a pie, even if you only have to take it out of the box. The bottom line is if things don’t go as planned, it’s fine, there’s no need to point fingers in a way that’ll get you ridiculed on social media.

Real talk, though? Did they discuss this with Sharon first or is this the most wonderfully snarky social media manager to end 2021 with?