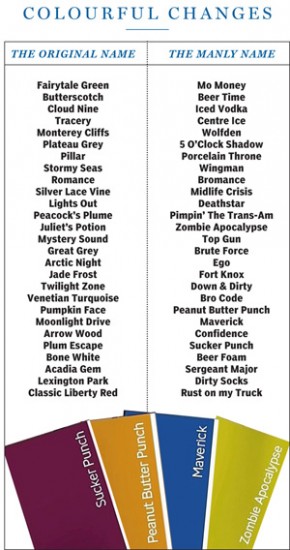 Canadian paint company CIL Paints has renamed 27 of their paint chip names to be geared toward men in an attempt to get men to be more excited about painting projects, a notion at which Tim Taylor would grunt. Dubbed “Ultimate Man Caves,” the paint colors now boast names that CIL Paints feels would make men want to paint things, and how could we not, now that we can paint the color “Dirty Socks” instead of “Lexington Park?” Though, aren’t all men’s rooms filled with dirty socks to begin with, CIL Paints?

Some of the names are genuinely funny, even if their reason for existence is misguided, and seeing what some of the new names used to be called is just as funny, for instance, “Venetian Turquoise” is now known as “Bro Code.” “Silver Lance Vine” is now known as “Midlife Crisis,” another odd change. Perhaps the most subtle change, “Romance” is now known as “Bromance,” so now a bro and his best bro can bro out watching Sunday football after they watch a season of Scrubs and learn how bromances are done. A personal favorite, the color “Pillar” changes to “Porcelain Throne.”

“When it comes to paint names, it’s all about the emotional connection and our research shows that men and women tend to relate to paint names differently.”