Let’s Talk About Manhattanhenge, Why It’s Special, and Why You Should Try to See It Tonight 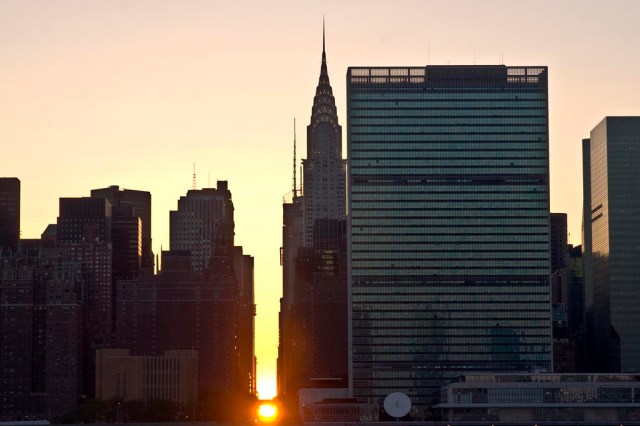 “Manhattanhenge” is an occurrence when the Sun sets between the buildings of New York City. It happens tonight and tomorrow, and despite what one snarky commenter thinks, it’s not something that just happens anywhere with east/west running streets. Here’s how it works and why it’s special.

This event happens twice a year, and when I wrote about it last May, a commenter on the article wasn’t impressed by my “NYCentric [sic] model of the solar system” or seemingly by Manhattanhenge at all, saying, “It’s not like this could happen in countless towns and cities on literally every other day of the year,” because it should happen anywhere with east/west running streets.

I’m sure the phenomenon of the Sun setting between two buildings isn’t unique to New York, but there are enough factors at work that really limit the number of places in the world something similar can happen. First, it’s not just east/west streets. I live in a small suburb. My street runs east to west, but thanks to trees and other houses at the end of my street, there will never be “Glen’shousehenge.”

Manhattan’s streets don’t run perfectly east/west. The grid is angled by about 30 degrees. The Sun doesn’t set perfectly in the east unless it’s an equinox. It moves predictably along the horizon a little bit every day, and there are just two days a year when the setting sun lines up with Manhattan’s grid. That’s Manhattanhenge. (Technically it’s four days a year if you count the half-sun appearance, and you should. It’s the better of the two views.)

Not all cities are built on a grid pattern, but for the most part, Manhattan streets run in straight lines, meaning you can get a clear view of Manhattanhenge even when standing clear on the other side of the island.

Manhattan is an island, and that’s important for this, because it juts up against a wide expanse of flat water. As the Sun sets, there’s nothing to obstruct the view as it disappears on the horizon of the street. Other cities have east/west streets, but there could be things like mountains to the west blocking the view.

Lastly, not all cities have many skyscrapers. They frame the Manhattanhenge sunset beautifully. They’re what make Manhattanhenge interesting. Without them, it’s just a sunset.

Don’t believe me? Take it from Neil deGrasse Tyson, who coined the term.