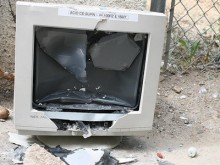 In quite possibly what is one of the oddest headlines you’ll see today that’ll put you through a roller coaster of hilarity and depravity, a Florida man in his underwear stabbed his computer with a samurai sword when his home was raided this week on the suspicion of a cache of child pornography.

21-year-old Kamil Mezalka is faced with federal charges of downloading child pornography, and could face a minimum of five or up to twenty years in prison if convicted. On Tuesday, law enforcement obtained a warrant and raided the man’s house after no one answered the door. Once the agents entered the house, Mezalka came out of a bedroom on the second floor with his hands up, but then quickly returned to the bedroom and closed the door. Agents followed him into the bedroom, and upon entering, saw that he was in his underwear and witnessed him stab his computer with a samurai sword, obviously quite aware of what the raid was about.

Amusingly, it was previously known that Mezalka had and used a samurai sword for things, as he was credited for defending his mother from his stepfather with one when his stepfather was choking his mother. Agents also found various swords in Mezalka’s bedroom, scattered across the floor, on shelves, and hung on walls.

So, if we learned anything from Mezalka, it’s probably that if we’re trying to destroy evidence, a clean stab through a machine with lots of different parts, many of which don’t need to work in order for information to be stored, isn’t the best way to go about it.