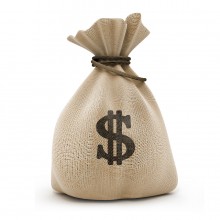 Earlier this month, Robert Adams, 54, found a Chase Bank bag that contained $17,000 near a Walgreens ATM. Being the nice guy that he is, he drove over to a Chase Bank and turned the bag in, rather than make it his partner on a spending spree. Instead of a hero’s welcome for being honest and turning in the found $17,000, he ended up being fined $500.

When Adams initially turned in the bank bag, he claimed he found the bag outside a newspaper stand in Rolling Meadows, when in actuality, he found the bank bag near a Walgreens ATM in Midlothian, which police confirmed via security footage. It’s alright if you cannot locate Rolling Meadows or Midlothian — the point is that Adams technically lied about where he found the bag and thus, filed a false report, which is why he ended up being fined for turning in a load of found money. Adams claimed he lied about where he found the bag simply because it was a hot day and he just wanted to go home and he felt more comfortable filing the report with Rolling Meadows police. “I wasn’t looking for a reward. I was just doing the right thing,” he said, and now probably knows to just take the next bank bag he finds that is stuffed to the brim with cash for himself instead of turn it in.