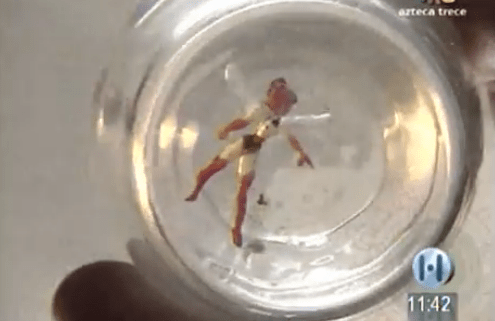 Jose Maldonado, a bricklayer in Guadalajara, Mexico recently managed to do something that no one has been able to pull off: He captured a fairy. Best Week Ever quotes him as saying:

I was picking guavas and I saw a twinkling. I thought it was a firefly. I picked it up and felt that it was moving; when I looked at it I knew that it was a fairy godmother.

Not necessarily his fairy godmother, but a fairy godmother. Still better than, say, a plastic fairy figurine, right? Following his discovery, he took the fairy godmother and preserved her in formaldehyde (presumably because he assumed she was already dead) and is now showing her off to all comers, for a price. Currently unemployed, Jose is asking for donations from the thousands of people who have come to see and, at least to some extent, are convinced. “I’ve seen everything and, yes, I believe the fairy is real,” said one visitor who has apparently seen everything, except maybe Peter Pan.

(via Best Week Ever)