Maisie Williams Feels The Pain Of TV Deaths. You Know, The Kind Game Of Thrones Viewers Are Used To. 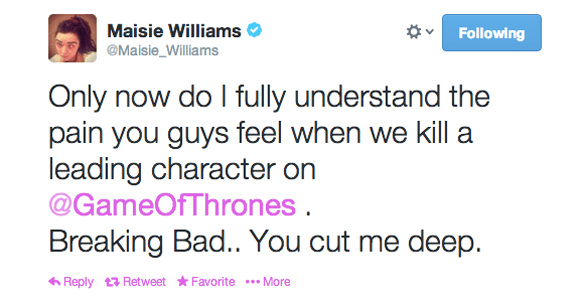 Game of Thrones actress Maisie Williams spends a good portion of her year playing Arya so she probably doesn’t have a great deal of time to sit down and binge a whole television season. So she just now got around to watching the Breaking Bad season finale and tweeted this message to her followers. Not that it’s in any way her fault for what happens to the characters we love on Game of Thrones but I still take a little evil satisfaction out of this.