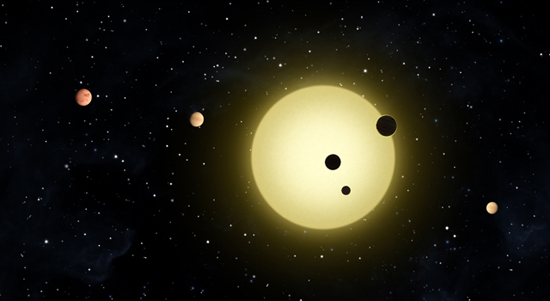 We have loads of astronomical data on various planetary systems that sits on shelves that only a select few folks actually seem to be interested in. That isn’t to say it’s not a fascinating area of research but books can only reach so many people. But what if we were to translate this data into musical chords? YouTube user Unfuzified has done exactly that with the Kepler-11 system. The six planets are given a pitch based on the distance from their star and the volume is determined by their size to form a fascinating sonata.

The closer the planet is to the star, the higher the note. The bigger they are, the louder they are — which makes perfect sense. As they complete an orbit, they ping out in this way. The entire thing is drawn from a minor 11 chord according to Unfuzified.

Perhaps the most interesting thing one can glean from the sonata is that the six planets of the Kepler-11 system aren’t in orbital resonance. Orbital resonance occurs when the planet’s orbit is actually a simple fraction of another planet’s. The secret’s in the way that the melody never repeats in any recognizable way:

If one planet circled the star in three days whilst another did so in six, they would eventually repeat their melody. None of the planets appear to do this though some come close. It’s because of this that the song constantly seems to strain against itself in discord. Regardless, it’s a fascinating sideways glance at what we already know.