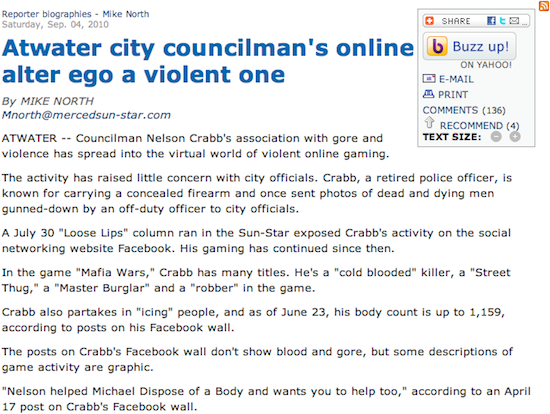 Gamers often complain that their hobby is treated with suspicion and contempt by the mainstream media, and maybe they’re right: A central California newspaper recently wrote a sensational article entirely about the fact that a City Councilman and retired police officer enjoys playing Mafia Wars. (Note that this isn’t on-the-job; this is during his private time.)  Apparently, the Mafia Wars alerts that Facebook spams your walls with aren’t just minor annoyances: They are evidence that the player is a sociopath.

Consider these quotes from the article:

Sadly for the Merced Sun-Star, none of the local government officials contacted by the paper particularly care about their colleague’s scandalous spree of blackmail and “icing.” “What Crabb does with his personal time is his business,” said Assistant City Manager Stan Feathers.

Icing on the cake: According to the online comments, this story actually ran on the front page of the paper.

It’d all be funny (well, more funny) if a) this was an Onion-esque satire and not the product of a “newspaper [that] has become known for its investigative journalism”; b) it didn’t engage in the familiar gamer-bashing trope; and c) it did not constitute a vicious, pseudo-muckraking attack on a retired police officer. In the words of my colleague Glenn Davis: “I wonder if they do writeups like that on every elected official who enjoys The Godfather.”