I sort of want to pet him but I think I have enough hair on my body as it is. 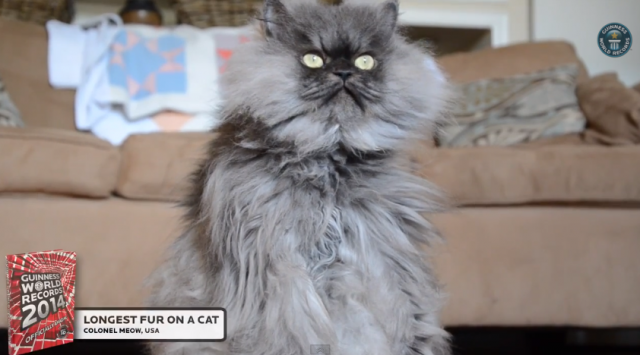 The 2014 edition of The Guinness Book of World Records is set to drop on September 12th, and will feature some brand new records — including “Longest fur on a cat.” Come on, you know you were really, really curious about which proud feline would receive that particular accolade. Or should we say… furrrious? Okay, we won’t. I’m sorry.

As a Himalayan-Persian crossbreed, two-year old Colonel Meow’s fur reaches about 9 inches long (or 22.87cm) on average. Holy crap. I’m pretty sure the minimum requirement for a Locks of Love donation is 10 inches. This means you could conceivably make a fairly okay bob-style wig for a human out of that fur you shaved from the Colonel.

L.A.-based owners Anne Marie Avey and Eric Rosario say they need to give Colonel Meow’s fur a serious brushing about 2 to 3 times a week in order to make sure it doesn’t get matted. They also have created a Colonel Meow-penned Facebook page, Twitter account, and official website. I guess that’s what you do with you pets, now — you create a social media brand from their point of view and sell T-shirts to strangers with their squishy little faces on ’em.

In case you’re wondering how such an impossible creature even moves with that amount of fur-weight holding it down, then never fear! We have video.