Somebody LEGO-fied the Roomba Shark Cat, Do We Really Need To Say Anything Else

I think we've have achieved everything it's possible for society to achieve. 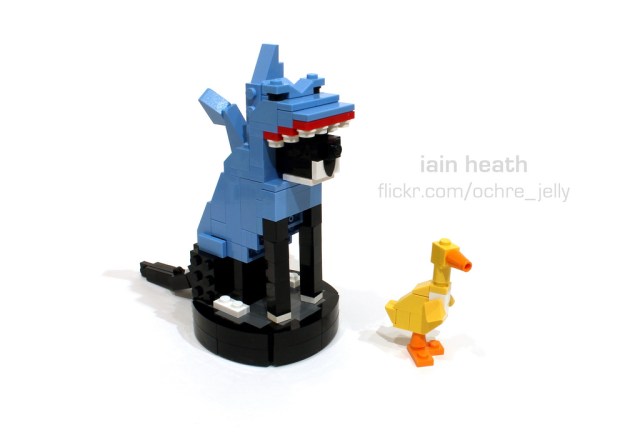 No doubt you’re at least tangentially aware, through GIFs or some other medium, of the Shark Roomba Cat. It’s a cat dressed up a shark who sits on a Roomba and chases a duckling around a kitchen. And now LEGO builder Ian Heath has taken the madness a step further and created his own tribute. A LEGO shark Roomba cat, if you will. Or a shark Roomba cat LEGO. We’re not sure.

Heath also created a short video to pay proper homage to Max-Arthur (That’s right, the shark Roomba cat has two first names) in which he rolled his LEGO creation down a wooden board to make it look like it was doing its Roomba thing.

If you’ve never seen the original video by Youtube user Helen Arnold, then boy are you in for a surreal treat. Seriously, it’s like if David Lynch directed a really adorable commercial for Roombas. No accompanying music, no narration — just a bunch of unrelated clips of a cat chasing a duck on a Roomba. Oh, and also there’s a dog, too. They all stare at you in their shark costumes as the camera zooms on their unblinking, judgmental eyes, and you feel insignificant in the face of such terrible beauty.

In addition to this majestic piece of shark Roomba art, Ian Heath is responsible for creating LEGO tributes to a lot of the Internet’s favorite things, including the Earl of Lemongrab from Adventure Time, Grumpycat, and Wil Wheaton signing things at a convention.