Is This Article the Most Brilliant Troll of All Time? | The Mary Sue

Is This Article About LOLcats the Most Brilliant Troll of All Time, Or Way Behind the Times? 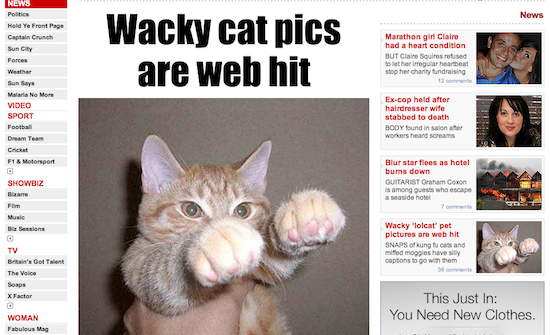 This article over on The Sun, entitled “Wacky cat pics are a web hit,” is an article from today, which happens to fall in the year 2012. The article only has a few sentences written up, followed by a handful of the mentioned “wacky cat pics.” As anyone who has an Internet connection knows, these “wacky cat pics” are LOLcats, and have been a cornerstone of the Internet for roughly ever. So, either we’re looking at a humorously out of date article, or we’re looking at one of the greatest trolls of all time.

The more I think about which side of the trolling line this article falls upon, the less sure I become. It certainly seems genuine, as if the The Sun serves a reader base that wouldn’t necessarily be hip to the Internet jive and they finally decided to teach said reader base about what makes up the majority of the Internet.

However, the post only contains a few sentences followed by a few pictures, with no links to the Cheezburger Network or any kind of article describing what a meme is, nor does the article actually mention the word “meme.” The user comments on the post are ambiguous, some of which quite clearly trolling, some of which seemingly genuine. So, what we’re looking at is either a somewhat embarrassing but genuine attempt at educating a readership that may not be hip to the times, or the best troll of all time.

Check out the article and decide for yourself, there are a ton of puns that your mom would probably like.