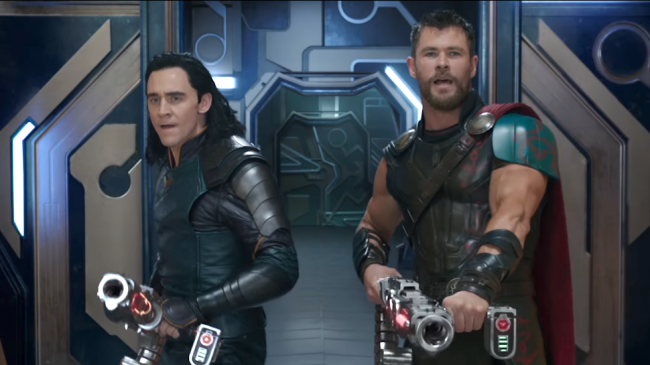 The release of a highly anticipated trailer always leads to detailed breakdowns, out-there theories, and persuasive analysis, which we can treat with caution, since trailers often deal in obfuscation and intentional misdirection. Sometimes the scenes we see don’t even make it into the movie’s final cut!

But that didn’t stop many writers and fans from running wild with the few seconds of footage that we saw of Loki in the Infinity War trailer. So I’m tossing my hat into this here ring. Let’s run wild.

With the caveat and reminder that we saw roughly three seconds of Loki in the trailer, there’s still a lot to talk about. The trailer seemed to confirm what most of us suspected watching Thor: Ragnarok: that Loki, ever the slippery opportunist, in the last moments before setting off Ragnarok at Thor’s request, couldn’t help himself and snagged the glowing Tesseract (which contains the Space Stone) from Odin’s vault.

The only glimpse we get of Loki in the trailer shows him, disheveled and looking beaten, in the aftermath of a battle or attack, stepping over bodies—young ones—and then slowly turning up his wrist to offer the Tesseract to someone who was towering above him. This prompted a flood of speculation and headlines, like “Avengers: Infinity War Confirms Loki’s Thor: Ragnarok Betrayal” (really, Screenrant?) and “Avengers: Infinity War: Is Loki working with Thanos?” (probably not, Techspot).

Does this look like a man gloating over getting away with another betrayal? Hardly. While other Loki defenders have focused on the fact that he seemed to redeem himself in Ragnarok and cross more firmly from the villain spectrum into heroism by sporadically helping Thor, and arriving to turn the tide of the final battle and save the Asgardian survivors, I’m going to take us back even further, to The Avengers. What we learned in that movie suggests that Loki doesn’t want to be anywhere in Thanos’ vicinity.

I loved Loki’s arc in Ragnarok, and I agree that to have him turn on Thor and what remains of Asgard so quickly would be a big step back in terms of a build in character development that started with Thor: The Dark World. We’re used to Loki being duplicitous—and, yes, in the first Avengers-era, a callous villain—but scheming to knock his brother down a peg or take over Earth isn’t the same thing as willfully assisting with Asgardian genocide. Because it seems as though the bodies Loki is standing amidst are Asgardian.

The reigning popular theory with Loki fans is that Loki is attempting to trade the Tesseract—to Thanos, or some lieutenant—in order to spare the lives of the wandering, defenseless Asgardians. If both Thor and the Hulk are somehow no longer present on the ship, Loki would be the one left to broker some kind of escape.

Presumably, Thanos doesn’t give a damn about a ship full of Asgardian refugees, but he does care about the Tesseract, which he needs for the Infinity Gauntlet. That’s why the last scene in Ragnarok shows Thanos’ ship suddenly bearing down, seconds after Thor optimistically asserts that everything is going to be all right now. And as much as he cares about the Tesseract, Thanos also has an investment in Loki.

What some “Loki betrays all” theorists seem to have forgotten is that while Loki worked with Thanos once before, he is not likely to ever be in his good graces ever again, no matter what he does. So this isn’t some long-con turncoat scheme of Loki’s for his own benefit. Back in the Avengers, Thanos’ scary lieutenant The Other warned Loki:

If you fail, if the Tesseract is kept from us, there will be no realm, no barren moon, no crevice where [Thanos] can’t find you. You think you know pain? He will make you long for something as sweet as pain.

Well, Loki failed, and the Tesseract was kept from Thanos—for many years, at this point. Thanos is presumably finally delivering on this threat, and in fact, probably only descends on the refugee ship because Loki and the Tesseract are there. It’s unlikely—even if Loki were to pull an evil grin and declare himself a villain all along and totally on Thanos’ side—that Thanos would accept this. Thanos is there to make Loki long for something as sweet as pain.

So if I were to bet money based on three seconds of footage, I’d say that Loki is offering the Tesseract—either as a gamble he hopes to turn into a trick—or as a desperate last stand to save Asgardian lives (and yeah, his own). He looks pretty tortured and conflicted to be handing over the Tesseract, suggesting that he’s gone through some significant suffering and resistance to get to that point. And since in other scenes we see Thor struggling to hold an exploding structure together, it’s also possible that Loki is motivated by the desire to save his brother’s life, as well. They’ve come to many blows before, but their affection for each other remains‚ as Ragnarok evidenced. Check out Loki’s expression when Thor suggests they should never see each other again:

From a pure practical plot standpoint, I’d also remind that Loki was pretending to be Odin on Asgard for quite some time, with full access to the Tesseract and other powerful treasures. If he wanted to be in Thanos’ good graces, he could’ve turned that Space Stone over long ago without anyone being the wiser. But he didn’t. As King at last, it turned out Loki wasn’t evil so much as wanting to take in a lot of self-aggrandizing theater and lie about in luxury, snacking on grapes. Not so much the stuff of villainous legends.

It’s also worth mentioning that both Loki and actor Tom Hiddleston are hugely popular with fans of the MCU and Marvel Comics, and fans will want to see him receive a deserving treatment, even if that means a truly spectacular and deserving death. Not only is Loki by leaps and bounds the best cinematic villain that the MCU has produced, but the fact that he can quickly flash into antihero and even hero territory has created an unparalleled character. There isn’t anyone in the MCU without their own movie—or the DCEU, for that matter—who is as complicated and multi-layered as Loki, full stop. Bucky Barnes comes close, but we haven’t spent nearly as much time with him onscreen.

The compelling duality of Loki’s nature is a large part of what has led to his popularity. In a world of flawless golden gods and billionaires with flight suits, Loki often feels more accessible: He’s the overlooked younger sibling. He later learns that he is a monstrous “Other,” which fits with a lifetime where he felt he never fit in. He has a contentious relationship with his father, but loves his mother. 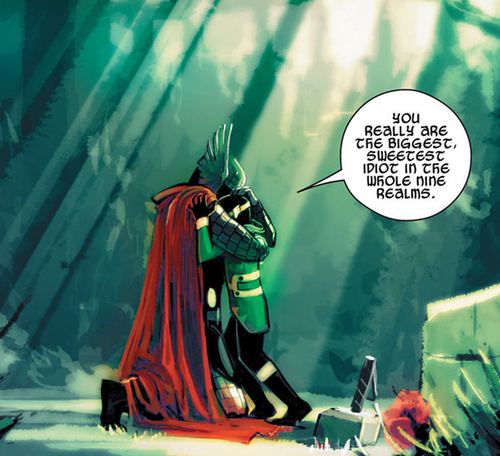 He both resents and adores his brother Thor, and longs for his approval. He is selfish and self-centered, but not to the point of no return. He demonstrates that people can be many things at once, often quite literally, projecting himself as various illusions.

In the comics, he shapeshifts and can appear as Lady Loki and in other incarnations and forms, a genderfluidity that is precious to many fans; he’s also canonically queer, and for these aspects, he can feel like the most well-known Marvel character who has been updated to the modern age. I’m 1,000 words into examining Loki’s characterization, and I could go for thousands more. I don’t think there’s anyone else in Marvel’s universe that I could say the same about at the moment.

Yesterday, when I wrote about fandom’s reaction to the trailer, many of you in the comments came forward to share your Loki takes. “No matter how much I brace myself, I won’t be ready if Loki dies (which is looking likely),” Yaboiksar wrote. “In the comics, some of my favorite Loki stories start from ‘And then Loki DIED!’… I’m not sure if they can pull this in the MCU though,” said Malitia, reminding us that even death might not be the end. BettyBoop summarized a general opinion among a certain segment of fans: “I will weep like a child if/when Loki dies.”

But all wild and fun and sad speculations aside, I think he will have many surprises left for us, and that whatever this trailer or future trailers or plot leaks or pictures might suggest is likely just something that Loki would well understand: a trick to keep us guessing.