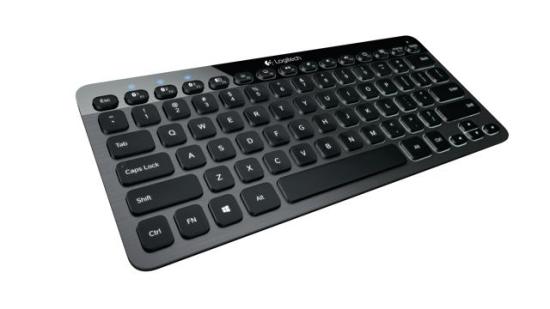 Within close proximity to my computer, I have another computer, a smartphone, two current-gen video game consoles, a nice HDTV, and three video game handhelds. We’re living in the era of owning multiple, relatively affordable smart devices, but we can’t usually interact with them all at the same time. Logitech is aware of this issue, and though they don’t quite alleviate it with the release of their new K810 Bluetooth keyboard, they’re headed in the right direction.

The K810 keyboard effortlessly switches between three devices with the press of a button, seamlessly granting the user access to a connected computer, tablet, or smartphone. As someone who rolls his office chair around his room jumping from device to device, this kind of feature is extremely welcome. However, though the K810 connects to Windows 7 and 8, Android 3.0 or later, and iOS 4.0 or later devices, the Logitech product page mysteriously doesn’t list OS X, and somewhat predictably doesn’t list Linux compatibility. However, a specific mention of the two operating systems doesn’t necessarily mean the keyboard won’t work. As with most peripherals, you’ll just have to take the risk and find out.

They keyboard sports a brushed aluminum aesthetic, topped with the slim, chiclet key design that seems to (slowly) be taking over keyboard designs lately, and also features illuminated keys for when you’re switching between your tablet and computer in the dark. The illuminated keys auto-adjust depending on the ambient lighting, and the keyboard also employs a proximity sensor to detect when your hands are nearing the keyboard in order to light up the keys.

Regardless of the multi-device functionality, the keyboard is specifically designed with Windows 8 in mind, as it comes with a function to scroll through open apps.

Even though the keyboard is wireless with illuminated keys, Logitech claims a fully charged battery will last up to ten days. Luckily, the keyboard charges through USB, and can function while charging. The K810 also has a battery life indicator and an on-off switch so you can get constantly get anxious about battery life and shut the thing off whenever you’re not using it.

The keyboard will release sometime later this month in the U.S., and next month elsewhere, for a hefty price of $99.99. However, the idea of being able to effortlessly use one keyboard for multiple devices is a fetching one.