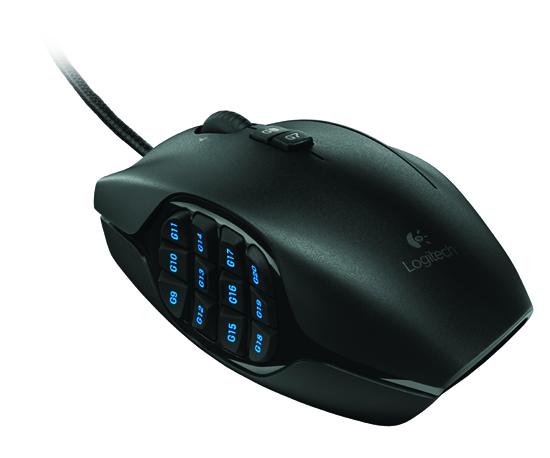 If you’ve ever played an MMO, a problem you’ll run into is that screen real estate quickly becomes an issue as you attempt to balance the number of hotbars filled with character skills, spells, and items, while somehow maintaining enough game visibility to make sense of your character’s surroundings. The issue that immediately arises after that is, man, those are a ton of skills, spells, items, and equipment sets that you need to somehow be able to conveniently reach in a split second. That’s where gaming mice come in. Before now, the Razer Naga was really the only MMO-tailored mouse in town, but Logitech has something to say about that with their new G600 MMO gaming mouse. I spent a week with the 20-buttoned beast. Let’s see how that went.

I’ve always had a thing for gaming mice, and have been married to my 17-button Razer Naga for around one year, so I was stoked to see how Logitech approached the MMO mouse genre. First off, as is vital when looking at MMO mice, the G600 has a total of 20 buttons, 3 more than the Razer Naga. Whereas the Naga has a 12-button thumbpad on the left side of the mouse, a clickable scroll wheel, a left and right click, and two buttons on the top left of the left click, the G600 removes those two top left buttons, adds a scroll wheel that can click left or right as well as the standard down, adds a third button to the right of the right click, and adds two vertically aligned buttons below the scroll wheel. The first vertically aligned button is simply a profile switcher so one can easily switch between button and sensitivity configurations, the left and right scroll wheel clicks are in place of the Naga’s two top left buttons, and the far-right click is a shift button to temporarily change the thumbpad’s button configuration on the fly.

Although there’s only one extra button that isn’t reserved for meta mouse behavior, that far-right shift click technically adds another 12 easily accessible buttons to your arsenal. When held down, that shift button changes the configuration of the 12-button thumbpad to a special “shift” profile preset, so when the shift is depressed, the thumbpad goes back to whatever the default user preset is. Out of the G600’s three different user defined configuration profiles, two of them allow the shift. I had the thumbpad buttons covering the 1 through = keys, while the shift covered the control+1 through control+=, and I had the second mouse profile do the same thing with the control key while the shift button was pressed, but with the number pad. I mainly used the G600 while checking out the new Dungeon & Dragons Online expansion. DDO employs hotbars that number from 1 through 0, providing 10 spaces per hotbar. Though the game is more action oriented than the standard crop of MMOs, hotbars are still pretty darn useful. With my Razer Naga, which doesn’t feature the shift button, I can only set 12 different hotbar buttons to the thumbpad, whereas with the G600’s shift button I can set 24. So, I have one hotbar numbered from 1 through 0, and the hotbar above it numbered from control+1 through control+0. It almost instantly spoiled me.

However, for all the instant glory of 12 extra buttons that shift button brings, it has a downfall. Currently, when the shift button is pressed, the mouse doesn’t recognize that you’re holding down the right click. As anyone who PC games knows, right click is vital in that it’s either your selector, or your camera. In the case of most MMOs, it’s your camera. So, if you wanted to hold down the shift click while also maneuvering your camera around to hit a moving target, you can’t, as the shift cancels out the right click. I’m not a mouse manufacturer and am not intimately familiar with the inner workings of gaming mice, but it seems this issue could be fixed with some sort of firmware update, as all of the moving parts work separately of each other to begin with.

There are only two other criticisms I could find. First, the G600’s enormous size. I actually love big mice; I like to rest my whole hand on the thing and am not fond of having to rest part of my palm or bottom of my wrist on the mousepad. However, the G600 is made heavy due to its size (which I enjoy), the weight makes it somewhat difficult to precisely move the mouse around when any kind of aiming or camera maneuvering is being performed. With ligher mice, you can comfortably lift them up high enough without actually thinking about it, and the laser will be far enough away from the pad to connect. However, the G600’s weight makes the laser connect even when I lift it up off the pad with the same force I’d lift the Naga and any other mouse. So, if I were trying to maneuver the camera by lifting the mouse up off the pad like one does, the laser still connects and the camera wigs out. It takes a bit of getting used to, but after a few days I was able to train myself to lift the G600 up with enough force to where my wrist wasn’t uncomfortable, but also the laser wasn’t connecting with the pad.

However, after playing with the color sliders for way too long trying to find the most perfect colors, I found that the plain red and plain white colors show up the best, while the sleek plain blue is actually kind of hard to see even though it was perfectly lit up. I also found this to be the same for almost every other color I tried, from rose, to washed-out light blue, to some sort of tope. I ultimately stuck with red and white because those were the easiest to see. If not for that, I would’ve defaulted to some kind of blue to match all of the other blue LEDs computers and monitors tend to employ. It’s important to note that I don’t have any issues seeing color, and the blue LEDs on my Naga are very easy to see.

So, am I going to switch from my beloved Razer Naga? Honestly, I have no idea, which is a pretty good sign for the G600, because up until I tried out the Logitech behemoth, switching away from my Naga was never even a question. The G600 and the Razer Naga both have pros and cons, and offer things the other doesn’t, and that’s why it’s so difficult to make a fully committed choice. The Naga is lighter and is more ergonomically and aesthetically pleasing, but the G600’s on-the-fly profile switching and shift button make cumbersome gaming controls so much easier. At $79.99, the G600 is priced exactly as the wired version of the Naga, so if you’re looking for a new gaming mouse, the choice simoply comes down to better ergonomics versus that rad shift button.

Check out the product page for the G600 here.