The Case for Logan Huntzberger as Rory Gilmore’s Best Boyfriend

We already know Paris is her best partner, though. 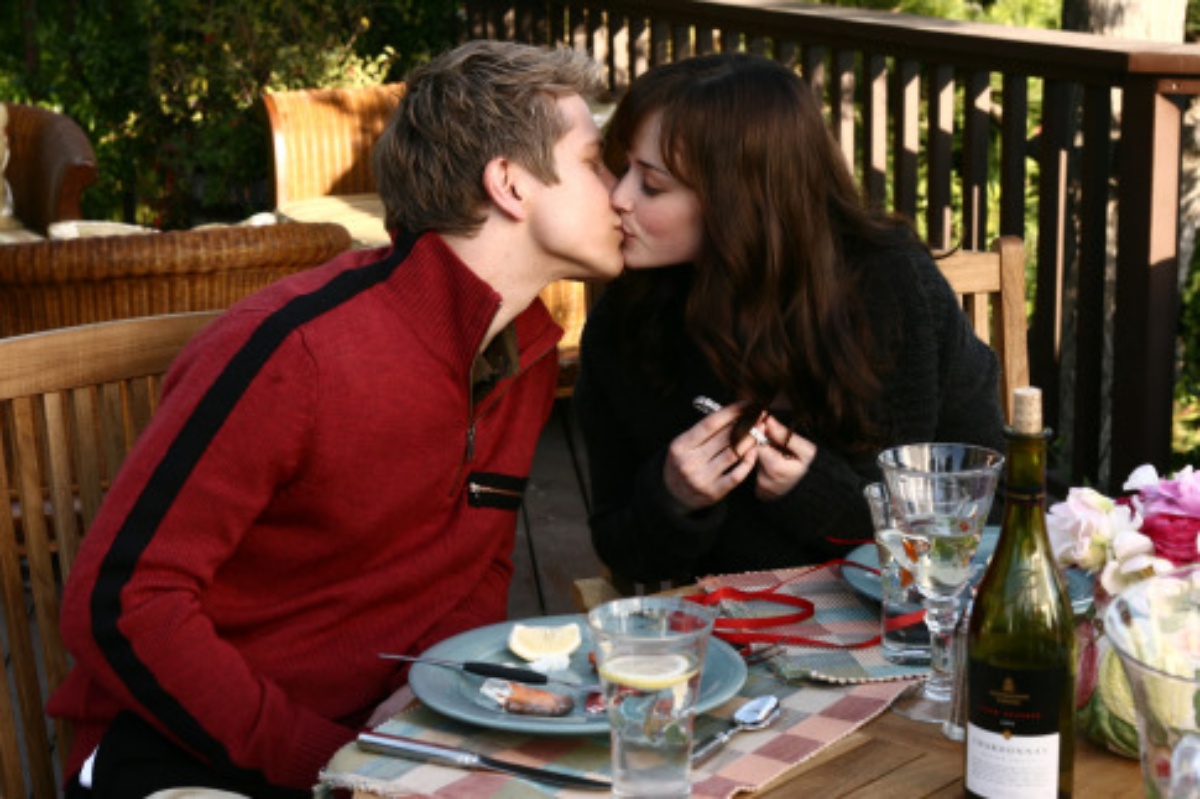 One of my favorite sports is discussing Gilmore Girls and I consider it a sport because you need quick reflexes, strong breath control, and the ability to take a lot of pain. The most grueling of all discussions: which of Rory’s boyfriends do you think is the best? Now I am infamously a Logan (and Christopher) fan, but after reading Gilmore Girls: A Cultural History (The Cultural History of Television) by Lara C. Stache and Rachel Davidson, I was reminded of how disliked Logan is by fandom. So I wanted to lay out my argument for why it is Logan Huntzberger, the butt-faced miscreant himself, who is the best boyfriend for Rory Gilmore. Or at least not the worst.

Now when people say they love Rory, most of the time they are taking about pre-college Rory. Before college, Rory was the more practical and reasonable person, but when she goes to Yale and pays someone $20 so she can sit under one particular tree, Rory becomes so ridiculous that Lorelei actually needs to parent. The latter seasons expose something very key about Rory: she is a snob. Class in the show is a mess, but one of the things that defines Lorelei (at least on paper) is that she is not attached to the fancy rich lifestyle that she grew up in.

In comparison, Rory is someone who loves being part of that world. Is it weird and uncomfortable at times? Absolutely, but Rory loves being in places where she can excel and be someone who epitomizes excellence. Part of that is being a Gilmore and coming from that family tree. Her high school Chilton Preparatory School was filled with rich kids, but it was much more a purely academic setting and it says a lot that her biggest rival was Paris, someone who was exceptionally intellectually gifted and their conflict was about that mainly. (We choose to ignore Tristan because who even was he anyway?)

Yale, however, is a new level. Because unlike at Chilton where Rory was admitted because of her grades and academic talent, a part of why Rory is in Yale is because she’s a legacy. This doesn’t discount that she is smart, we know that (even though she didn’t realize you needed extracurriculars for Ivy Leagues but … whatever). However, the Gilmores being at Yale goes back generations. The family donates there, she’s the granddaughter of alumni. Her getting it was all but secured the moment she was born. That kind of wealth, privilege, and expectation of excellence is not something that Dean or Jess could understand, but it is something that Logan can.

When we first meet Logan he is an asshole. He’s a prankster, he calls Rory “Ace” (a sin many can’t forgive me … I’m into it), and he’s just the epitome of privilege. However, unlike most of the rich people we see on the show, he knows his advantages in the world and doesn’t try to pretend otherwise. He is immature and Rory knows that fully when they start going out he tells her, that he’s “not a commitment kind of guy.”

After a while, realizing that being casual isn’t for her and recognizing in “But I’m a Gilmore!” he does have real feelings for Rory, the two decide to have an exclusive loving relationship. This is the episode where we see how tightly Rory is attached to who she is through the lens of high society:

RORY: But why don’t they think I’m good enough?

RORY: I mean, I’m a Gilmore! Do they know that? My ancestors came over on the Mayflower!

LOGAN: Don’t try to analyze it, there’s no rhyme or reason!

RORY: I had a coming out party! I went to Chilton, and Yale, and why are they okay with Josh? I mean, he doesn’t even say anything! At least I noticed the Velazquez!

For most of the show, Rory has never had to fight for a thing at this point. Even her rivalry with Paris over Harvard ended with her being victorious even though Paris 1000% worked harder than her. In her romantic relationships, both Dean and Jess were obsessed with her from the jump so as audience members who have followed Rory throughout the show, when she’s crying over Logan in “To Live and Let Diorama,” it’s heartbreaking because we know she cares a lot about him. But, she agreed to be in a no-strings-attached relationship and he took her at her word. And I don’t think Rory is wrong for feeling sad and let down because someone you love doesn’t love you back.

But we also have to understand the other side, and for Logan, someone who admits he’d never been in a real relationship, he is acting the way he feels enabled to act. What is significant though, is that when Rory does express how she feels, he responds. He answers the call to be her boyfriend because that’s what he wants to do if the choice is them being together or not. The most notable thing about the Logan/Rory relationship is that he treats her as an adult. He trusts her to speak her mind and make her own decisions. Problem is that Rory often doesn’t know what she want, because for most of her life she lived without serious challenges.

A lot of blame gets put on Logan for Rory’s bad choices because he doesn’t hold her hand into situations with the advice of a sage. Rory is an adult. She makes choices and it is not Logan’s responsibility to be her caretaker, especially when they just start dating.

There are some, even Lara C. Stache and Rachel Davidson, who claim that Rory’s attraction to Logan has to do with “daddy issues” over Christopher, but I think that underplays all the people involved. Christopher and Logan are both good-looking rich kids, but that’s pretty much where the comparisons end. Logan has always tried to rise to the occasion when it comes to Rory’s feelings. He just also pushes back.

One of my favorite moments is in “Introducing Lorelai Planetarium” where Rory writes this judgemental piece about the launch party of Logan’s new internet company. He is hurt because he feels she is talking about him and mocking his accomplishments, despite having the same high-brow background.

LOGAN: Exactly, I mean where do you get off acting all morally superior?

RORY: That is not what I intended to say at all.

LOGAN: You clearly think you are. Why? Because you read “Ironweed”? ‘Cause you saw “Norma Rae”?

LOGAN: Wake up Rory whether you like it or not, you’re one of us. You went to prep school. You go to Yale. Your grandparents are building a whole damn astronomy building in your name.

RORY: That is different, okay? It’s not like I live off a $5-million trust fund my parents set up for me.

They eventually reconcile and in the scene, they have an adult conversation. While I know season seven is divisive, I love that it allowed Logan and Rory to have an adult relationship without love triangles, without faux divisions, and it showed that (wow) Rory could be in a relationship with someone who didn’t feel like their emotional drama meant they should be a piece of crap. We also got to see Rory really be her own person. Who she was sucked, but it felt like a natural, organic evolution for a character who was defined by her perfection.

Logan never treated Rory like she was perfect and that may sound shady, but I think that’s the only way you have a real relationship. I always feel, even upon rewatching, that Jess and Dean treated Rory like a prize to be won. I remember Dean being sad and talking about Rory the same way she sadly, drunkenly cried over Logan. Logan saw Rory as a person, a person he loved, a person he respected, but he also had his own growing up to do and he didn’t need to step on her to do it.

To address the infamous “Bridesmaids Revisited” episode where Rory finds out that Logan slept with his sister’s friends when they “took a break.” First of all, those girls were deadass vile for saying that stuff. When one of the girls goes ” you’re Rory-Rory” and drops the r-word, you kind of know she’s vile. How many Rorys do you know? Also, the fact that the conversation continues is gross.

Should Logan have warned Rory about this? Should he have slept with these girls? I’m of two minds about it. I feel like if Logan genuinely thought that they were separated and didn’t know what was going on, then he had the freedom to sleep with whomever he wanted and Rory would have same freedom. This is a conversation they should have had when they got back together, for a lot of reasons, including to check for STIs (simply because partners should know their sexual health history), but because this is television and no one has those conversations we don’t know that. I think they weren’t good communicators at the beginning of them being a couple so they both messed up.

That being said, if you are on a break (like a real break, not a Ross 2-second break) then you are on a break. I would not expect that if my girlfriend is a member of a bridal party with fully grown adult women, that they would just start talking about how they had sex with me? It’s just bonkers to me. I think the should have had the conversation, but I also think that it’s weird to stigmatize people for having sex when they are on a break, if they are responsible.

I know that’s a controversial opinion and I look forward to reading y’all opposition.

Anyway, Logan reads well for me because he feels like an adult. Much like Mr. Big on Sex and the City, you can map out his flaws well, but being flawed doesn’t mean it denies him from being a good love interest. Sometimes the best love interests are the ones who tell us about our protagonists, as The Take explained about Big.

I rebuke the revival version of Logan. I don’t know him.

Please share all your unpopular/popular Gilmore Girls takes below. I look forward to reading them.