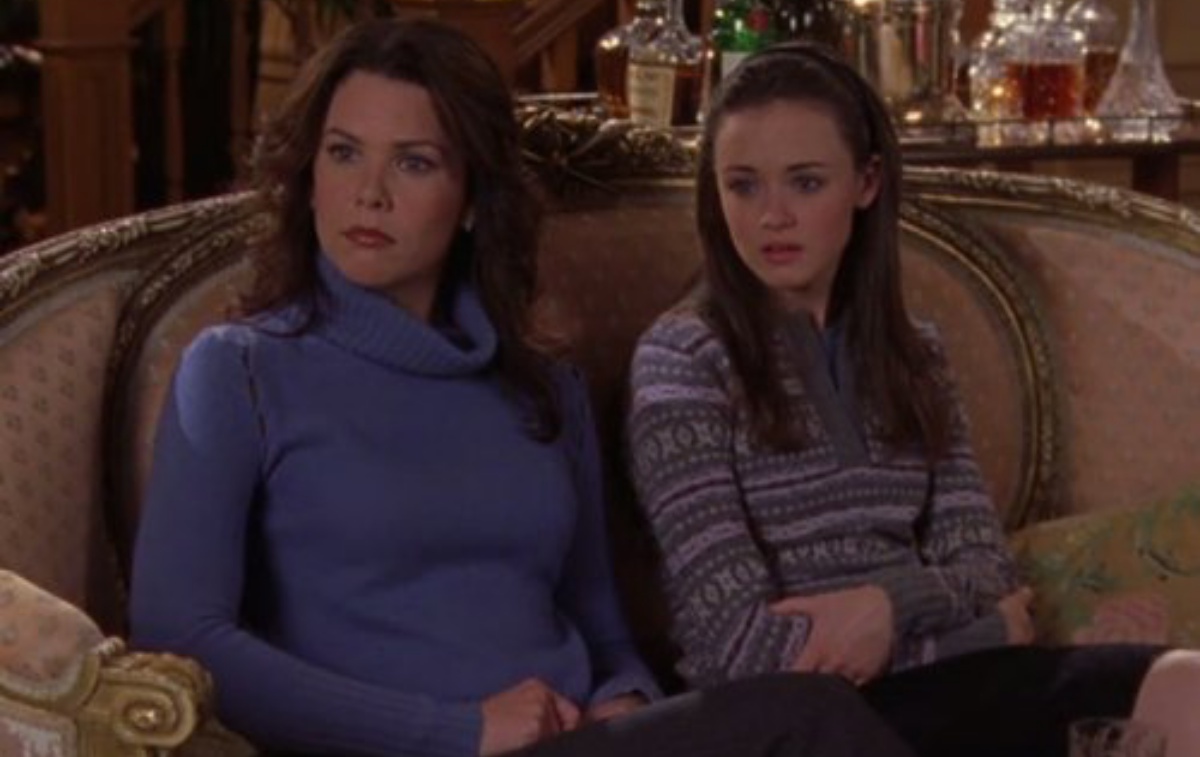 Now to be fair, I don’t think any of the canon couples in Gilmore Girls are good, not in terms of the sum of their whole. Cute moments, yes. Fully functional relationships? Nah. Counting A Year in the Life as canon—which it unfortunately is—it solidifies something for me that I’ve always thought: Luke and Jess are not the right boyfriends/husbands for Lorelai and Rory.

The Case Against Luke Danes:

When my then-girlfriend told me to watch Gilmore Girls she and our other friend praised the Lorelai/Luke (and Jess/Rory) relationships to high heaven. They’d grown up with the show and I decided why not. Luke was a fine working-class (but secretly super-rich) guy who seems like an asshole but has a heart of gold. I was looking forward to seeing what his relationship with Lorelai would be like until season one, episode 17: “The Breakup, Part 2.” For non-Gillys, this is the episode after Dean breaks up with Rory.

When news travels about the breakup, Luke bans Dean from the diner and tries to fight a sixteen-year-old for breaking up with Rory. It was one of the most childish things I’ve ever seen on television and it’s soured me towards Luke ever since. Every time I rewatch that scene I groan with frustration at his aggressive childishness. This scene is supposed to show how much he sees Rory as “his daughter” but that sort of patriarchal behavior is gross.

When Jess comes up as a potential love-interest for Rory, Luke starts treating Rory as a means towards Jess’ redemption. Which is gross. Luke puts Lorelai on a weird pedestal, while also spouting off low-key sexist bullshit all the time. However, not even I can deny that Luke and Lorelai have had cute moments, but then season six came around, with its drama for the sake of drama.

Although she has become a Dawn-like scapegoat, April (Luke’s long-lost daughter who appears in season six) is not the reason for Luke’s childish behavior. She simply is the catalyst for him to be his most insular uncommunicative self. We see this in the revival when they legitimately haven’t had a serious conversation about having kids together in the entire span of time that has passed.

Lastly, my biggest issue with Luke and Lorelai’s partnership is that he views his defining benefit in their relationship as being that he won’t ever leave her. During their big fight in the revival, Luke says as much and Lorelai has always said that Luke’s stability was what drew her to him. But that is often reflected in Luke and Lorelai being at serious odds about an issue, with him giving in for Lorelai’s sake. That’s not a healthy relationship.

Plus, what do they even really have in common as people? If the reason they are together is that Lorelai is a “prize” and Luke is the one who values her best then … that’s romance I guess?

The Case Against Jess Mariano:

Even as someone who is a proud (yet critical) member of Team Logan, there is no denying that Rory has dated a bunch of stinkers and probably belongs with Paris forever. Yet of all the teams, Jess is without a doubt the most popular. It’s not surprising–he’s handsome, emotionally damaged and just waiting for the love of a patient good woman to fix him. Like a working-class Kylo Ren.

Jess is an asshole. He’s an asshole in the usual put-upon way that white dudes with “issues” get to be even though Paris also has “issues” but would get reamed for behaving that way. One of the things that bothers me about the boyfriend wars is how everyone is willing to call Dean abusive, yet Jess’s emotional manipulations of Rory throughout their relationship are treated as signs of his troubled upbringing with a “crazy” mom.

Except when we meet Liz she’s basically no more kooky than the average Stars Hollow citizen! That disconnect between what the narrative tells us and what we actually see exists all throughout Gilmore Girls (don’t get me started on Christopher inconsistencies or Emily/Richard’s early relationship with Lorelai), but it bothers me so much with Jess because we are meant to pity him. That troubled background is supposed to make up for him be rude, a bad boyfriend, that time he was way-way too pushy with Rory in the bedroom of a party. Or, oh, the fact that he’s actively flirting with someone else’s girlfriend while having his own girlfriend (Rory was always written to be a cheater, guys).

All the blame for Rory’s bad years is laid on Logan’s head, but let’s be real, Jess was the first person she was actively an asshole with.

For me, the problem with Jess and Luke (fittingly) is that their bad attitudes are treated as signs of their depth and that if only they had a good, quirky woman to help them smile and get out of their shell. Nope. You have to come out of your shell by your damn selves, gentlemen.

I will say this: Unlike Luke, Jess does grow up, but it is telling that all that development happens off-camera. By the time he returns, he is a fully formed man with a self-published book while Rory is all sad and pathetic and deep into her nepotism. In fact, by the end of the revival, I think Jess is probably the best love interest, but at that point, Rory is such a horrible person that I would only wish her upon the Jess of seasons 2-3.

Who are your favorite couples on Gilmore Girls? And Team Luke and Jess fans I’m prepared for the eggs on my car.