Highly-evolved genitalia is a good way to tell if someone's a lizard person. That, and if they unzip themselves out of their meat suit. 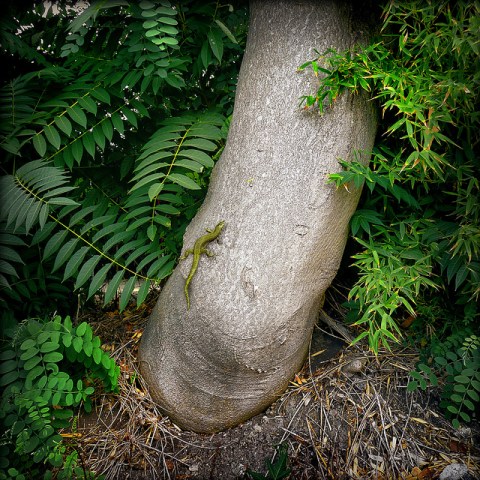 In a study published last week in the Journal of Zoology, scientists have confirmed for the first time that Caribbean lizard dongs rise to the evolutionary occasion faster than any other lizard body part. I’d say that the news might prove useful for Russia’s famous fornicating geckos, but sadly this lizard ween breakthrough comes too late for those brave heroes.

In order to better understand the speed with which hemipenes (the plural for a reproductive organ in snakes and lizards, go forth and use that knowledge wisely) evolves, Julia Klaczko of Harvard University and her team studied 25 different species of Anolis lizard and contrasted penis shape with leg length and the size of skin flaps on the lizards’ necks. After examining the length, width and lobe size of hemipenes to see the speed with which these features develop, the researchers determined that lizard ding-dongs evolve at six times the rate of other monitored physical traits.

I’m no scientist, but I’m pretty sure this is the approximate speed we’re talking about here.

Kirsten Nicholson of Central Michigan University in Mount Pleasant says the team’s findings confirm a long-held theory: “The idea that genitals evolve more rapidly has been around for a long time. Now we have support.” And according to Gunther Köhler of the Senckenberg Research Institute and Natural History Museum in Frankfurt, female Anolis genitals may actually be keeping up with the peens: “Wherever they have been examined, the female Anolis genitals match the shape of the corresponding penises [good band name].”

Have fun in bonetown, lizards!

(via New Scientist, image via Vittorio Pandolfi on Flickr)