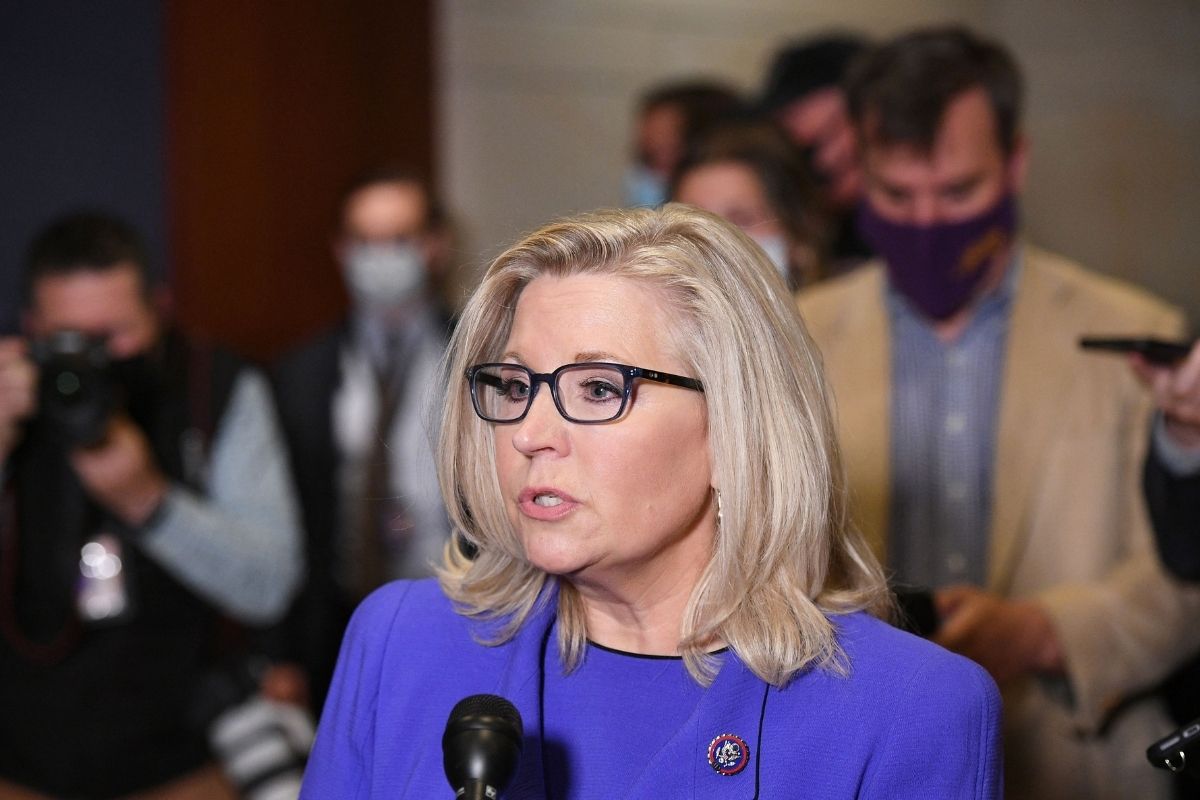 Maskless clowns to the left of me, conspiracy jokers to the right, here I am, stuck in the middle with Liz Cheney. Rep. Liz Cheney (R-Wyo.) spoke out on Twitter against Georgia Rep. Marjorie Taylor Greene’s latest offensive and unhinged rant. In an appearance on Christian Broadcasting Network host David Brody’s podcast “The Water Cooler”, Greene compared the House’s mask mandate to the Holocaust, saying, “You know, we can look back at a time in history where people were told to wear a gold star, and they were definitely treated like second-class citizens so much so that they were put in trains and taken to gas chambers in Nazi Germany, … And this is exactly the type of abuse that Nancy Pelosi is talking about,” she added.

MTG says Speaker Pelosi wanting Members of Congress to get vaccinated and if not to wear masks is “exactly the type of abuse” as murdering Jews in gas chambers during the Holocaust and David Brody nods along. No follow up. pic.twitter.com/inXfD8UBiG

Because having to wear a piece of cloth on your face to protect co-workers from a deadly virus is absolutely the same as the genocide of the Jewish people. Very cool and normal perspective on the Holocaust! And while journalists and democrats called out MTG’s deranged anti-Semitic rant, republicans stayed unsurprisingly silent. With the exception of course, of the last sane person left in the republican party, Liz Cheney. Cheney tweeted “This is evil lunacy.” in response to the video.

This is evil lunacy. https://t.co/xHeUgbx7wa

Cheney’s was joined by a handful of republicans in condemning Greene, including Rep. Adam Kinzinger (R-IL) and Rep. Peter Meijer (R-MI), who told host Dana Bash on CNN’s State of the Union, “Any comparisons to the Holocaust, it’s beyond reprehensible. This is, I don’t even have words to describe how disappointing it is to see this hyperbolic speech that frankly amps up and plays into a lot of the antisemitism that we’ve been seeing in our society today, vicious attacks on the streets of New York and in Los Angeles that should be, and I do condemn that in the strongest terms. There’s no excuse for that.”

Comparing wearing masks to the abuse of the Holocaust is a not so subtle diminution of the horrors experienced by millions. It’s a grotesque idiocy mixed with a neurotic lack of self awareness.

What do you expect from a truther, Q believer, and gaslighting conspiracy theorist? https://t.co/tkH1vIOAfb

Cheney was recently ousted as GOP conference chair, largely due to her criticism of Donald Trump and her refusal to join in on the republicans’ Big Lie over Trump losing the election. Cheney, Kinzinger, Meijer, and others form the small contingency of republicans placing democracy over QAnon conspiracy theories.

Is Cheney right about Greene? Absolutely. But before we go lauding her as some sort of feminist folk hero, let’s remember that this is the same woman who voted with Trump 93 percent of the time. Cheney also sold out her gay sister in opposing marriage equality in a failed bid for the Wyoming senate seat. She has aided and abetted Trump’s cruel and corrupt agenda from the start, and has worked as a faithful steward of republican politics.

In true Serena Joy fashion, Cheney has finally realized that she’s the architect of her own political demise. But the poetic justice of Cheney getting owned is diminished by the frightening policies and tactics of the majority of the republican party.