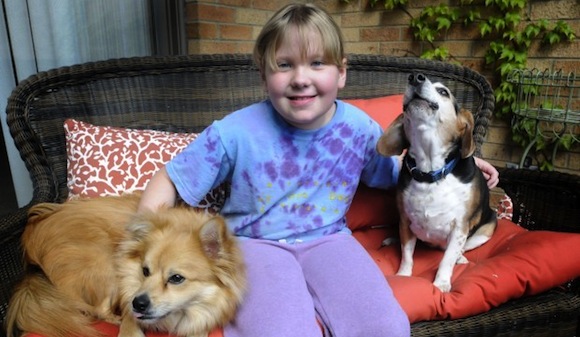 Cloey Nyberg‘s dogs Steve and Luna look pretty ordinary, but they were the inspiration for her winning entry in Capstone books’ “My Pet is Super! Contest,” which means they will soon be immortalized with appearances in the next DC Super Pets book.

Capstone’s DC Super Pets is a young reader series featuring the hypothetical pets of pretty much any and every DC superhero, some of them canonical… some not so much, illustrated by Alt Baltazar of Tiny Titans fame. How did Cloey get her pups alongside the likes of Ace the Bat-Hound and Krypto the Superdog? Why, with the written word, of course, like any other good Daily Planeteer.

From the Lincoln Journal Star:

“In judging the entries, we were looking for all the elements related to a newspaper article, and also creativity, originality and overall content,” said Michael Dahl, fiction editorial director at Capstone Publishing, which sponsored the contest. “Cloey’s winning article stood out because it was a realistic situation enhanced by the extraordinary powers of her two super-dogs. It also included a strong headline describing the article and a quote from the owner of the super-dogs (Cloey). Our team at Capstone was also very impressed with the originality of the super-pets’ names, Luna Moon and Sprightly Steve.”

Cloey’s plot idea and characters will be incorporated into a new Super Pets book in January, where her dogs will help Ace and Krypto themselves against a “super-cat villain.”