Sound of the Big Bang | The Mary Sue

Listen to the Big Bang, Now in High Fidelity 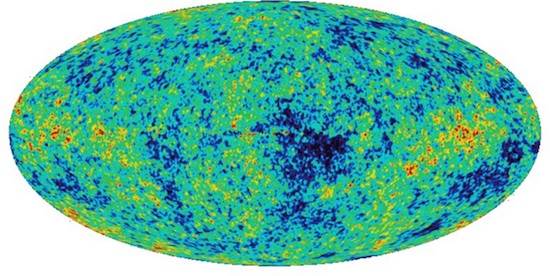 It’s a well known fact that children ask the best questions about science. For evidence of this, you need look no further than a question posed by an 11-year-old to physicist John Cramer almost a decade ago: Is there any recording of the sound of the Big Bang? The question got Cramer wondering if he could recreate an approximation of the sound of the Big Bang, so that’s just what he did. Using data about the background radiation levels of the universe and translating those heat levels to sound waves, Cramer offered the first approximation of the sound that would have rung throughout the newborn universe in the millennia following the Big Bang. Now, thanks to new data from the Planck telescope, Cramer has been able to remaster the original sounds of the universe into a high-fidelity special edition, and you can take a listen below.

So apparently the birth of the universe sounds just like the trippiest part of a Stanley Kubrick movie. That’s…very fitting somehow.

We can only hope that the release of this special edition of the sound of the universe being born will be released with some worthy special features like B-sides of alternate universes being created. While God The Creator would ideally be available for interviews about the project, He has notably distanced Himself from the Universe in recent, calling it the product of a bad time in His career as an artist and bemoaning the fact that it’s the album for which He will be remembered. In other words, look for Neil deGrasse Tyson to do the liner notes instead.

This project also offers further proof — as if it was needed — that a terrible, stupid question asked by a grown adult is often actually rather endearing coming from a small kid.

(via University of Washington)