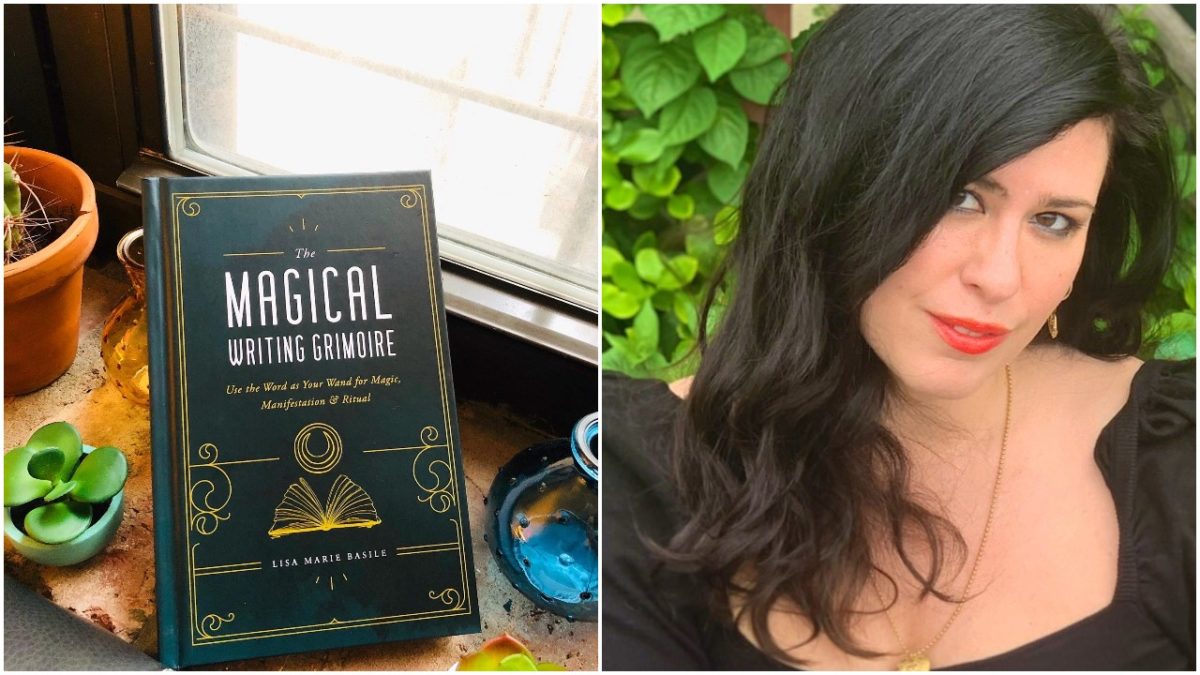 We are living, to put it mildly, in extraordinary times. They’re stressful and scary, and even when this crisis passes, all of our lives will continue to have some shadows. There are many methods out there for dealing personally with the chaos of uncertain times and the more intimate strains of just living as a human. We call a lot this “self-care” and while that term has been diluted and reduced taking a long bath, doing a sheet mask, and drinking a glass of wine, there’s more to it.

Self-care is about taking control and taking real steps to work with yourself, with your dreams and your fears and your desires. And for many, that takes the form of magic. Magic in the sense of self-actualization and ritual that work in a way that can be therapeutic for even non-believers, or spells that give practitioners of witchery a sense of power in a stressful world.

That’s at the core of the work of author Lisa Marie Basile. Her first book, Light Magic for Dark Times: More Than 100 Spells, Rituals, and Practices for Coping in a Crisis was a gentle, lovely work about using magic and ritual to cope in this exhausting world. From recharging after activism, spells for self-love and acceptance, and ritual for confronting darker memories, Basile’s work is the kind of magic that’s for everyone.

Basile’s new books (out in print April 28th and already available as an eBook) is called The Magical Writing Grimoire and is focused on just that: the magic of writing, journaling and just getting your feelings out and manifesting your dreams on the page. We spoke with Basile about the book, switcher, and why this is the perfect time to add a little magic to your life.

“I love when people can find magic in the everyday because it is everywhere,” Basile told us before we got into things. And she’s right because magic, ritual, and faith are all contacted.

“As a child, I was really interested in ritual and the ritual aspect of church,” she explained, noting she grew up among Sicilian Catholics. “I loved sort of the baroque fanfare and ritual nature of it all, although I really didn’t understand why.”

Basile grew up with a father who was interested in the occult, but it wasn’t until later in life, and after trying times as a teen in foster care, that she felt called to magic. “When I was young I didn’t realize the depth of the calling before I was really turned to it,” Basile said. “When I was in my late 20s I met women who identified as witches and that felt right to me, hearing what they said about their witchcraft as a form of autonomy … and I really connected with it because I didn’t really believe in a god but I did believe in nature and archetypes of the witch.”

And Basile found her own power in the written word. “I realized that writing was my way to contact the divine,” she said. Admittedly, that’s an idea I personally love, as a writer myself. And in her books, especially the Magical Writing Grimoire, writing translates as a form of magic that’s very accessible. All you need is something to write with, no herbs or crystals or brooms. “When I was a kid we were really poor and I was in foster care and I couldn’t go and buy stuff or join a club, it just wasn’t accessible,” which is why she wanted to write a book that was accessible to anyone.

“I think that anybody should be able to embrace spirituality,” Basile added. And that’s really the point of the book and the practice it’s about. No initiation or secrets. Just the reader, a pen, and the universe. “I feel that everyone should be able to connect with something deeper, something more mysterious.”

In that vein, what is magic, to Basile? “I think magic is what happens when we put our intention out into the world and shift that change within us, when we focus on our desire and our goals. It’s not necessarily external,” Basile explained. “It’s more the process of a self-transformation when you really start listening to yourself and asking for what you want. It’s that shift that happens when you decide ‘I deserve better.'”

And the basis of the Magical Writing Grimoire is that writing those things down is magic in and of itself. “I realized in making magic I had to tell the truth to myself,” Basile said. And telling the truth can be scary and intimate, but writing it out can be empowering. “When I write, I feel like I’m my most honest self.” Be it journaling or writing a letter to someone in the past, it’s that “complete truth that makes the change in your life.”

Though it wasn’t planned, this book arrives at a moment when people may have a lot of time for introspection and may be looking for a way to bring magic into the everyday. “I wish the world wasn’t totally sad, but I hope the book helps,” Basile said of the unintended timing. But in general, magic and witchcraft are seeing a surge in popularity, much as they did in the ’90s. And there may be a reason.

“I think whenever we start sensing that the institutions that are supposed to nourish us are failing,” Basile surmised, “we go back and examine the self and our space in the world.” When everything lets us down or is in chaos, it’s in us to connect to self and nature. “I don’t think magic can solve social problems or financial problems or political problems, but I think it gives us a sense of autonomy.”

Like Glinda the Good Witch told Dorothy, the power to get where you need to be has always been with you. And sometimes, all you need is the right magic words to get home.