Lisa Joy Is the Heart and Soul of Westworld, But Jonathan Nolan Writes “a Really Good Sassy Rancher’s Daughter” 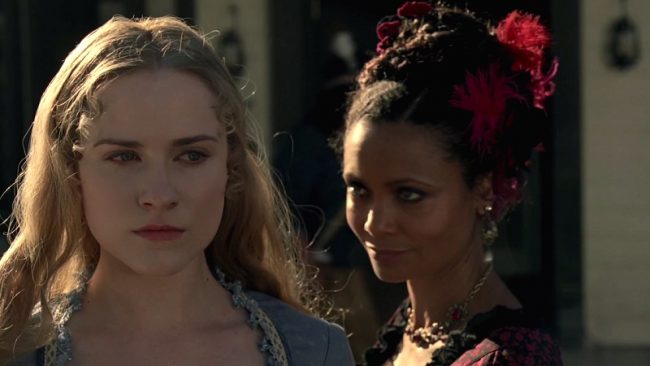 We already know that Westworld was inspired in large part by games like Grand Theft Auto, Red Dead Redemption, and Bioshock: Infinite (and we also know that Maddy wasn’t thrilled by the way that manifested on the show. At least, not in the beginning). However, Westworld is also, apparently, inspired by gummi bears.

To hear Lisa Joy talk, one gets the sense that she was the one who responded most viscerally to J.J. Abrams’ original suggestion that the TV version of Westworld focus on the lives of the hosts rather than on the guests. As she describes it, she’s “always had a problem with over-identification with inanimate objects.” Joy goes on to describe how this was not only true for anthropomorphized things like humanoid robots, but for things like gummi bears. “They’re cute,” she says. “They’re also delicious. I had a Gummi Bear sanctuary. I’d put them in this little chest that I had of precious things, these moldering Gummi Bears, that I’d keep by my window.” One hot day, she opened the box to find that the gummi bears inside were now a blob that “looked like soap,” and felt “really sorry that I hadn’t taken better care of them.”

Joy’s sympathy for inanimate objects extends to video games, too, and we’ve written here before that unlike Nolan, who plays games like Grand Theft Auto the way many people do, using it as an opportunity to indulge the negative impulses one would never indulge in life unless they were horrible, Joy enjoys the environments and “literally just cruise around the city and obey the laws. . . It’s hard for me to run over a lady, because I’m, like, Does she limp home to her family when you turn it off? Do they have health insurance?”

Whereas games gave them the language through which they could talk about the show (the hosts are NPCs), as well as an interesting lens through which to look at those who operate and program the park, it seems that Joy’s sensibility about how those “inanimate objects” should be treated is the thing that constantly hums underneath the surface of the show’s story. 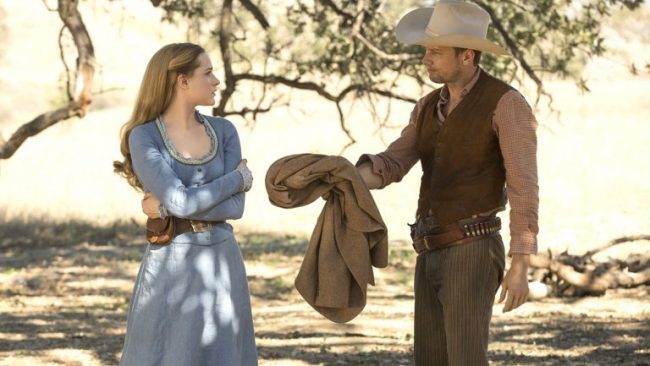 There’s a lot of talk about their relationship, including how they met at the premiere of Memento, and they are so adorable I totally developed a couple crush on them. #NotAshamed.

But besides that, it’s clear that they are the perfect team to tackle the intricacies and nuances of Westworld long-term. Their individual personalities and perspectives, as well as their interpersonal dynamic both as a couple and as a writing team, is exactly what the show needs if it’s going to do everything it should do to speak to today’s viewing audience. Joy talks about Westerns as a genre, and a portion of the interview talks about how her being a woman of mixed race contributes to what she hopes to accomplish with the show:

“Joy had long viewed even the Western’s most heralded examples with a kind of aesthetic and emotional remove. ‘I do love Westerns,’ she said. ‘But, in a way, traditional Westerns, for me, have been hard to love viscerally and personally. You tend to gravitate toward stories in which you see yourself. I don’t see much of myself in the traditional Western hero.’ As the first-generation American daughter of a British father and a Taiwanese mother, Joy found herself thinking about the Westerns she’d seen. ‘I would sometimes look at the side characters in those movies, hanging out by the saloon doors, or crossing the street, or working on a railroad, and think, Well, actually, that’s kind of more like who I would have been in the Old West. I wonder what their story is. To do it together in this show allowed us to explore all those stories. . . . That was irresistible to me.'”

However, this doesn’t mean the different elements on the show are clearly delineated, with Nolan handling the game-related ‘male’ stuff and Joy dealing with the emotional ‘female’ stuff. Joy mentions that the breakdown of who writes what has been “surprising the way it works out in the end. The breakdown isn’t what I would have thought. . . I thought I’d be constantly writing Dolores.” Nolan explains that Dolores was originally supposed to be more sassy, but that they changed her a bit, first to give her more of an arc, and second to distinguish her from Maeve. During the interview, as he talked about writing a Dolores scene, Nolan looked at his wife, saying:

“You were upset with me because I took too long to write it, but when I turned it in I was never prouder. Lisa said, ‘God, you write a really good sassy rancher’s daughter. You give good sass.’ “

Joy smiled and shrugged. “He did.”

“I was terribly excited about that,” Nolan said.

I would recommend reading the entire interview, as it demonstrates exactly the kind of push-pull between what people do and what people aspire to that I’m looking forward to seeing more of as Westworld continues.

While I would never begrudge the show the time it needs to be done right, late 2017 or 2018 just seems way too far away for a Season Two premiere. Feel free to check out Maddy’s and my dueling Westworld reviews to tide you over as you inevitably rewatch the series over and over to look for things you’ve missed.

No matter how long it takes, I’m so glad that Joy and Nolan are on the case. The more I hear from them, the more certain I am that this story is well in hand.

(via ComicBook.com, images via HBO/screencap)