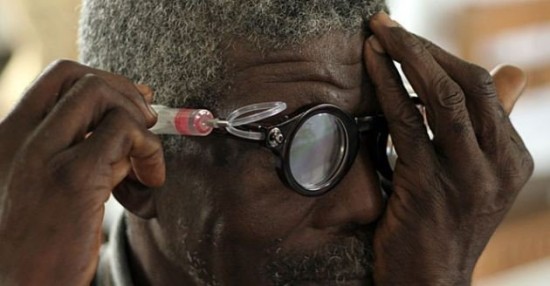 When you think of Third World problems, you general think of lack of food, lack of shelter, lack of clean water supplies, and things like that. While these are some of the more prominent issues, there are also many, many more you probably wouldn’t think of, like lack of access to corrective lenses, for example. Over one billion people in Third World countries are getting by with eyesight that is anywhere from “pretty bad” to “totally abysmal” because they lack access to optometrists, diagnostic equipment, and lenses. There may be a solution on the horizon however: $2 smartphone-operated diagnostic scopes in conjunction with liquid-lens glasses that can make themselves.

Eye examinations aren’t quite as simple as they appear to be. While you can come to some conclusions by using the good old fashioned letters-on-a-chart method — conclusions like “Man, you probably need glasses” — figuring out exactly what needs to be prescribed takes a little more fineness and generally requires large, expensive machines that are virtually impossible to move around. A new solution by EyeNetra, however, uses a smartphone to do the computational legwork and uses a simple $2 scope to track the eye movements. It’s an incredible step towards accessibility.

But that only solves one problem, right? You still need someone to make the lenses. That’s where the liquid-lens glasses come in. You may remember the custom-made, exact-fit earbud doodad that came out of CES; this operates on the same basic principle. Adspecs, as they’re called, are currently in testing as a joint effort between the silicone company Dow Corning and the Centre for Vision in the Developing World. The idea is that the frames are fit with pumps that dispense silicon oil into empty plastic lenses until the appropriate shape — courtesy EyeNetra, perhaps — is achieved. After that, you just disconnect the empty pumps and bam: Normal looking and durable eyeglasses.

Of course, this isn’t a perfect solution. Ophthalmologists will point out that this method doesn’t allow patients to actually try different lenses. Moreover, the glasses are a one-and-done deal, meaning that if they’re wrong for some reason, or the patient’s prescription changes, you need a whole new pair. Also, the $2 scopes can’t detect things like glaucoma.

That being said, this is still a huge advance in eye care; even an outdated prescription beats being effectively blind from irregularities that a simple pair of glasses could fix. Along with technologies like 3D printing, advances like this could ultimately make specialized equipment trivial for anyone to access, which could make the world a much better place.