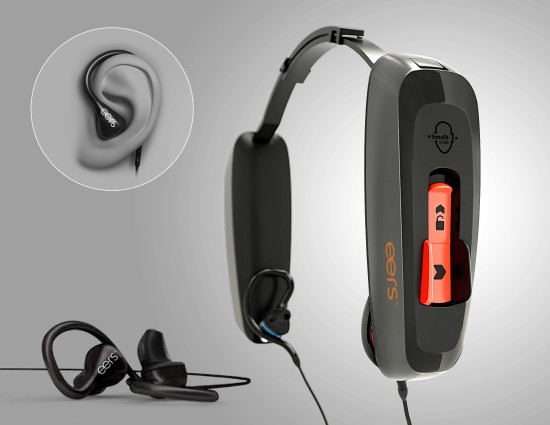 When you open up a pair of sound cancelling headphones, the first thing you have to do is play the “Which one of those weird nubs fits my ear canals best” game, which unfortunately can sometimes end in “None of them.” Well, if you’ve ever wanted earbuds that fit you perfectly, your life just got easier. Custom molded headphones have existed for a while, but up until now they’ve required going to an audiologist, having a cast made and then sent out to a lab, waiting 2-3 weeks, and paying several hundreds of dollars at the least. Eers, introduced at CES, aims to remedy this by making custom fit earbuds wherever you want, in only five minutes.

When you use Eers, the fitting system will actually use its silicone reserves to make a mold of your ears on the spot, so all you have to do is put it in, turn it on, and wait five minutes. Simple enough, right? At around $150-$200, Eers still isn’t cheap, but it’s a steal in the context of what you’d have to pay traditionally. It’s also worth noting that these are one time use molders. When you buy the fitting system, you’re essentially buying one pair of the buds, so don’t mess up.

Since the Eers custom molded nubs wind up being attached to the Eers headphones that come with the kit, hopefully the headphones are high enough quality to last for a while. It’s unclear if the nubs could be transplanted to another pair, but I’d be surprised if they could, at least without some serious DIY modification involved. That being said, options for plain earplugs or use with 3rd party headphones may be added in the future. In the meantime, a pricecut this huge is victory enough. Start saving up, they hit the streets right after CES.