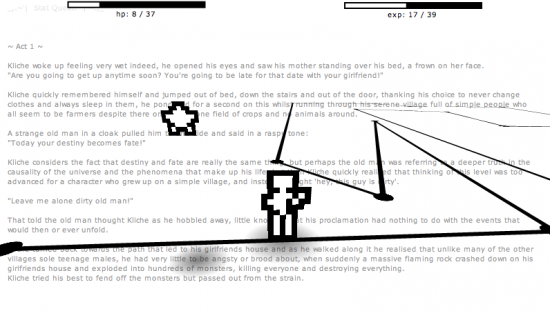 This game by Sophie Houden popped up in a Reddit thread on a satirical map comparing FPS design in 1993 versus today which has been making its way around the Internets of late. The Linear RPG consists of a linear path connected by nodes; to beat the game (which doesn’t take too long), all you do is continue to walk along the line, although you may have to go backwards to grind against weaker enemies. As such, the game parodies linear role-playing games (*cough* Final Fantasy XIII) which consist of strung-together cutscenes, with a little stat grinding thrown into liven things up.

The mystery of The Linear RPG is that in spite of its deliberate monotony, it’s somehow fun. There’s gotta be a profound journal article on human psychology in there somewhere; surely Square-Enix and other game makers would be interested.