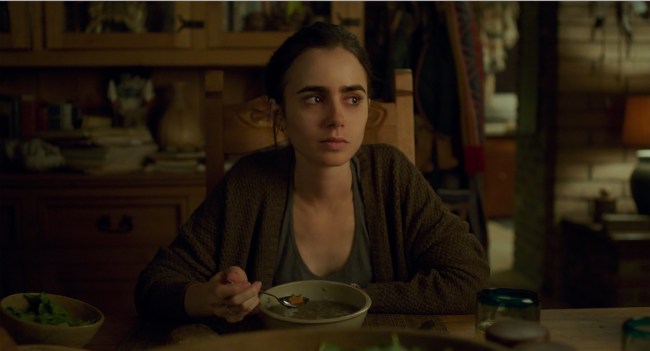 In a cover story for The Edit, Lily Collins opened up about her personal struggle with eating disorders in a conversation with To the Bone writer/director Marti Noxon, who’s talked publicly about similar struggles with EDs.

It’s a candid and personal conversation and I left with a lot of optimism about how To the Bone will address the topic. From Noxon’s assertion that they gave Collins a ton of support out of concern she would bounce back, to their shared experiences regarding the romanticization or glamorization of EDs, the two demonstrate a strong effort to fights against many initial concerns people had about the films.

Especially striking was the moment both women gave anecdotes, like Noxon’s comment that “People would joke to me all the time, ‘I wish I had just a touch of anorexia.'” During shooting of the film, someone actually complimented Collins on the weight she had lost for the role:

“I was leaving my apartment one day, and someone I’ve known for a long time, my mom’s age, said to me, ‘Oh, wow, look at you!'” “I tried to explain [I had lost weight for a role], and she goes, ‘No! I want to know what you’re doing, you look great!’ I got into the car with my mom and said, ‘That is why the problem exists.'”

While this woman obviously had no ill intentions towards Collins, this exchange illustrates exactly why it’s so horrendous to make unsolicited comments on other people’s bodies or to assume why their bodies look the way they do. Obviously, if someone is proud of their body and brings up their own healthy efforts, it’s probably innocent to say something positive, but equating thinness with something that’s inherently better or good is hugely damaging.

Acting like thinness is something to aspire to at the expense of one’s own health encourages eating disorders and contributes to their glamorization. Thinness doesn’t necessarily imply healthiness and you might not know what led to their weight loss. They might be ill (remember that Cosmo article about cancer as weight loss?), going through grief, suffering from an eating disorder, or something else. They might also be on a weight loss program by their own volition and proud of their progress. The point is, you don’t know and it’s hugely insensitive to comment on someone’s else’s weight without any information and to make assumptions about their body.

To the Bone comes to Netflix July 14th.