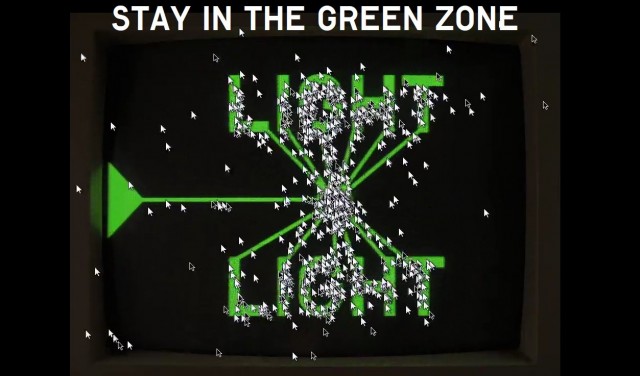 Computer mice and their pointers may not be long for this world. As touchscreen devices become more prevalent, fewer and fewer people may find themselves pointing and clicking. The band Light Light wants to make sure the mouse and pointer at least get a proper send off, so they’ve made the video for their song “Kilo” interactive and crowdsourced. The song and the video are pretty catchy.

The video for “Kilo” isn’t even really a video in the traditional sense. It’s more of a web-based interactive game with a killer soundtrack called “DO NOT TOUCH.” Each mouse pointer in the picture above represents a user watching the video. As the music plays, you’re instructed to do different things with your pointer. It asks you to point out your location on a world map, indicate your gender, stay within a green area, and more.

It’s a surprising amount of fun. The video itself records your mouse pointer and composites it with the pointers of others every few hours, so it really is “ever-changing.”

On the site for the video, the band describes the project like this:

After 50 years of pointing and clicking, we are celebrating the nearing end of the computer cursor with an ever-changing music video where all our cursors can be seen together for one last time.

You can click through to the video below, but I should mention that although it’s safe for work at the moment, it might not be in the future. Without the mouse pointers, the video features several shots of a naked woman with the instructions to not “touch” her with your cursor. When I played through the video though, she was covered up with pointers in all her NSFW areas. Since the video is constantly changing, that could change as well.

Watch, listen, and play “Do Not Touch.”

(Do Not Touch via The Next Web)