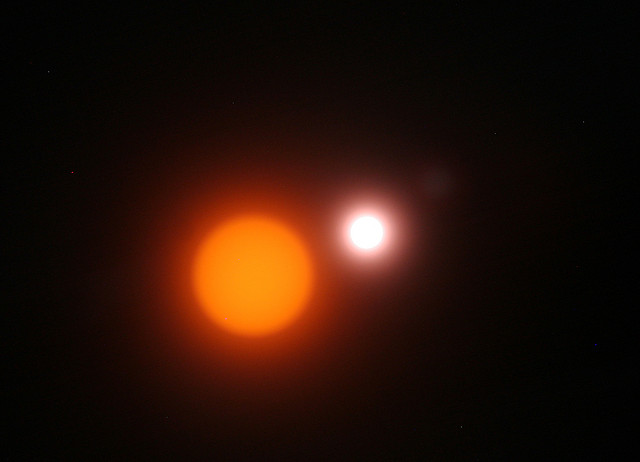 Apparently two are better than one. New research shows that binary stars keep each other in check and increase a moon’s chances of hosting life.

According to Paul Mason, an astrophysicist at the University of Texas in El Paso, binary stars have the ability to “calm each other down in terms of activity.” Mason and his peers are interested in theoretical calculations that could help establish which solar systems are suitable for hosting life on moons.

Young single stars are active, violent, and strip away the necessary components of planets before they have the chance to develop. However, stars in pairs reduce radiation and regulate each others’ stellar winds, thereby increasing the habitability of planets. This occurs as a result of the stars synchronizing their rotations. Mason is focusing on a circumbinary system. The stars orbit each other between 10-60 Earth days with a planet that orbits both of the suns.

The combined light from the pair of stars increases the range of the habitable zone more than what you would normally see with a single star. Distance here is crucial because orbiting too close to a sun would result in its moon being stripped away. According to David Kipping, an astronomer at the Harvard-Smithsonian Center for Astrophysics, the star will rip off the moon when it gets too close, thus making a greater habitable zone an important factor in potentially hosting life.

Of course, this theoretical research raises many questions, such as whether or not this would have any negative effects on the orbits when orbiting two suns instead of one. Also, there are a number of other factors that play a role in potentially hosting life other than the distance from the sun, like the mass of the planet or moon, or what happens when one star strips the light away from another as commonly seen in binary star systems.