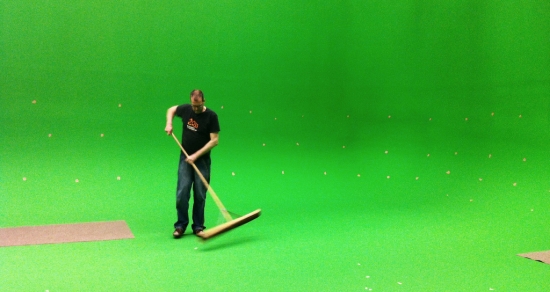 At last night’s Oscars ceremony, Life of Pi took home “Best Visual Effects” and rightfully so, Rhythm & Hues, the company that did the visual effects on the film, did beautiful work that really created the world of the movie. The same can be said of Snow White & The Huntsman, another CGI-laden film Rhythm & Hues did the effects for. Together, those films grossed over a billion dollars. Meanwhile, Rhythm & Hues had to file for bankruptcy and close up shop, so the visual effects community came out to protest what they see as an imbalance at the Oscars last night. The ceremony itself only made things worse.

When Rhythm & Hues’ Bill Westenhofer was accepting the award for the company’s work on Life of Pi the orchestra swelled with the theme from Jaws, and eventually Westenhofer’s mic was cut. That happens sometimes when a winner’s acceptance speech runs too long, but as Variety’s David S. Cohen pointed out on Twitter:

There are other factors involved in how long a winner gets to speak, certainly,  like whether the show is running on time or the name recognition of the winner, but considering the two awards were given out back to back in what many would consider to be minor categories, it seems pretty cut and dry that the mic was cut to avoid shining a light on the controversy. After the ceremony, however, Westenhofer was able to get his message out to journalist Bill Desowitz, telling him:

At a time when visual effects movies are dominating the box office, [the] visual effects companies are struggling. And I wanted to point out that we aren’t technicians. Visual effects is not just a commodity that’s being done by people pushing buttons. We’re artists, and if we don’t find a way to fix the business model, we start to loses the artistry. If anything, Life of Pi shows that we’re artists and not just technicians.

The visual effects community feels undervalued in an industry that is becoming more and more centered around the work they do. What’s the last movie you saw that had zero digital effects incorporated into it? And remember, not every movie is Life of Pi, with obvious CGI. Visual effects are becoming more and more pervasive in film, and if the people who create them suddenly stopped building these visual worlds, we’d all just be spending hours watching people in front of green screens.

(via Cartoon Brew, image via fsiddi)