Zombie Comedy Life After Beth Is Partially Dead on Arrival 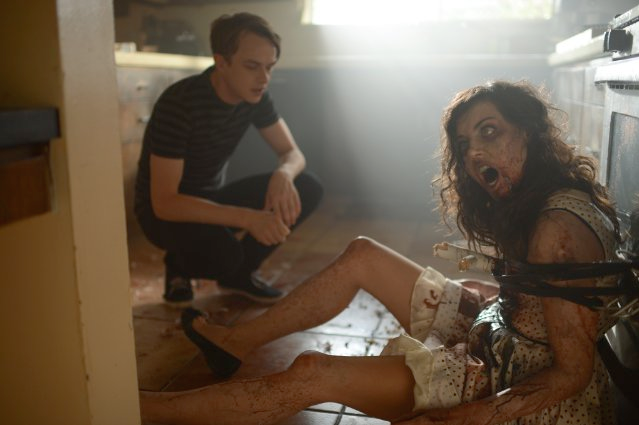 Who’s excited to see that movie where Aubrey Plaza’s a zombie and Dane DeHaan is her human boyfriend? Anna Kendrick is there! And John C’ Reilly! Molly Shannon! Matthew Gray Gubler! Get excited! No, not that excited. Moderately excited. Somewhat enthused. With a tinge of boredom.

Life After Beth is one of those movies that suffers from a trailer that almost completely misrepresents it. Watch that 1:49 amuse-bouche and you’ll get the sense of Life After Beth as a kooky and funny, if undoubtedly twisted, satire of the zombie genre. The clip (same link as the trailer) that’s been circulating around since it made its debut at Sundance features John C. Reilly and Molly Shannon showing why they’re comedy masters, and Dane DeHaan showing why someone needs to start casting him in roles that are lighter than his typical “I-am-so-intense-and-serious, look-at-my-piercing-eyes-and-be-afriad” fare. God knows he’s awesome at them, but the man has comedic chops as well.

And Life After Beth is a funny film—a highlight is Matthew Gray Gubler as Zach’s rent-a-cop older brother—but it’s also a horror film and a romantic drama. Tonally, it’s… odd. It’s basically a zombie apocalypse movie where the zombie apocalypse gets going realllllly sllllowwwwly, giving you time to see the still-living characters—primarily Beth’s parents and Zach—react to their loved ones’… er, changed circumstances. I can see why the marketing team decided to play up the comedy in the trailers, because who doesn’t like Aubrey Plaza being funny? But I can’t help but feel they really did the film a disservice, because going in expecting one thing and getting another is always going to throw you off.

Sometimes a film can recover from that (see: Snowpiercer). Unfortunately, Life After Beth was not one of them, because what it is is not particularly great. The “zombie apocalypse in suburbia” elements really worked for me, as did some of the worldbuilding (zombies being calmed down by smooth jazz is brilliant), but they were elements that weren’t expanded on all that much. Instead, the majority of the screen time is devoted to the relationship between Beth and Zach, and frankly, I don’t think that was enough to stretch out over a whole film.

We get the sense of it pretty early on—they were having relationship troubles, Beth died, Zach felt guilty, now she’s back but kind of not, hooray!—and then a good chunk of the middle of the film is just stuff we already know being belabored while more interesting things, things I wanted to know more about (smooth jazz), happened in the background.

Beth and Zach: The Short Film—great. Suburban Zombie Apocalypse: The Horror/Comedy Film With a Heart—also great.  Life After Beth—ehhhhh. It lurches around like a zombie on the hunt for tasty, tasty brains.

This is the first film from writer/director Jeff Baena, who previously wrote I Heart Huckabees. I look forward to what he does next, because Life After Beth, for all that it’s stuck in the undead limbo between good and bad, displays a real “fuck you” attitude toward genre conventions that I am always on-board for. As first-time films go, it’s not awful. It’s a Netflixer. But it’s not as good as it looks.

That Parks & Rec cameo was pretty fun, though. No, I won’t tell you who it is.