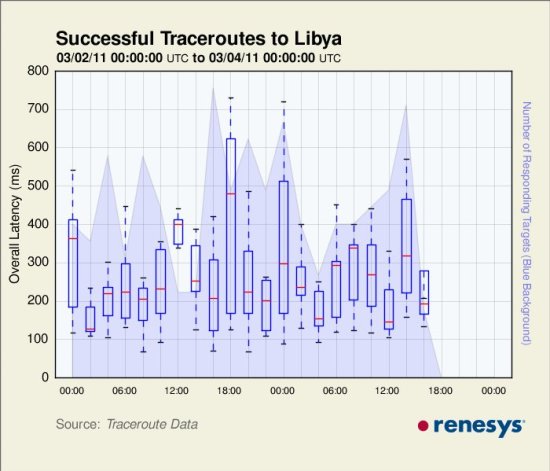 Several weeks ago, shortly after the protests in Libya began in earnest, the Libyan government brought down that country’s internet access. It was restored shortly thereafter, but service was interrupted again today and has remained down for over 12 hours.

According to Rik Ferguson from security company Trend Micro, todays shut down was different from before.  From The New Scientist:

“In Egypt they stopped broadcasting the routes in to the country,” […] Libya took the same approach on 19 February, making changes in a system called the border gateway protocol (BGP) to remove all routes in to the country, but the outage only lasted 6 hours. This latest disconnect is different. “It looks like the routes are still being broadcast, but the traffic doesn’t get a response at all. If you send something to Libya, you don’t get an answer,”

This latest suspension of communications comes on the heels of battles throughout Libya, and the seizure of hidden weapons caches by anti-government forces. The situation in the country is, clearly, about as erratic as its eccentric leader Colonel Muammar Muhammad al-Gaddafi. With the eyes of the world on Libya, hopefully the disconnection of the entire country does not signal worse things to come.

(via New Scientist, image via Renesys)