The Ghosts of Queer Film Past: 5 LGBTQ+ Films That Didn’t Quite Come out Right 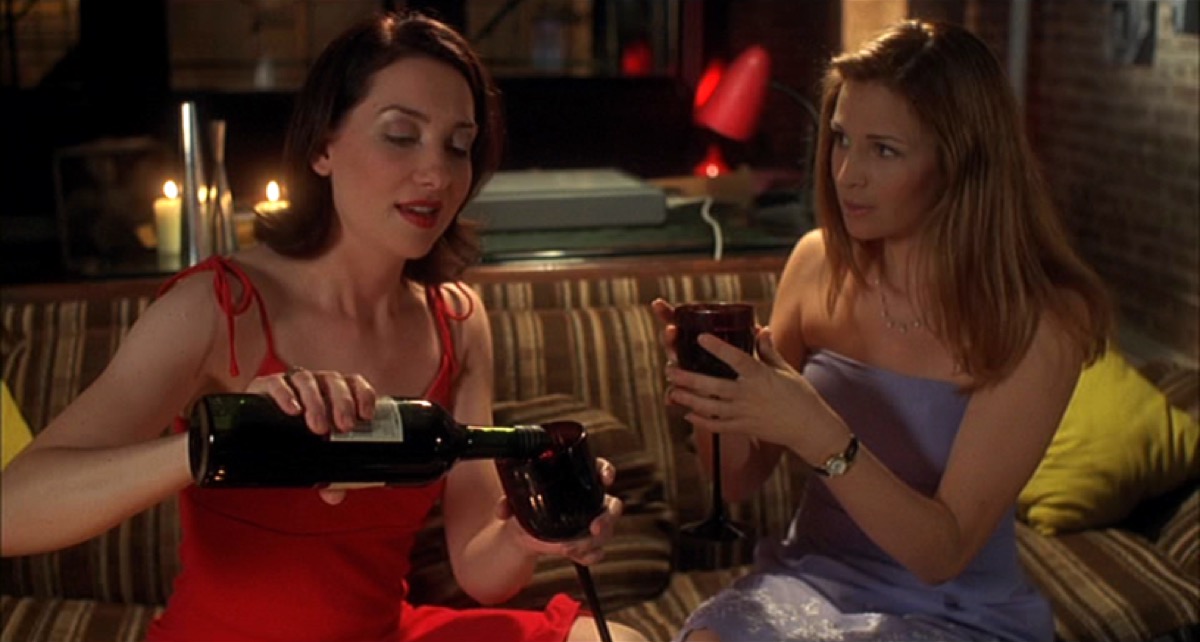 In our current age of righteous outrage and hunger for woke media, queer cinema has come a long way, to say the least. With recent successes such as Moonlight (2016), Disobedience (2017), and the gorgeous Netflix-restyled reboot Queer Eye (2018-present), we are warmly welcomed to consume diversity, love, and freedom.

We’re slowly (painfully slowly) moving in the right direction, so perhaps we should take a look at the somewhat-problematic past of LGBTQ+ media of yesteryear to understand its wack-ass intention, and how we could do better today, whether or not the content was well received back in its day of apathetic acceptance.

Some queer films of the past have disguised themselves as progressive endeavors, but in reality are hurtful exploitations seemingly created for The Straights™. Frank Oz’s 1997 work In & Out finds a home in this unsettling category, as a comedy that is completely unaware of what its intentions are.

When famous actor Cameron Drake (Matt Dillon) accepts his Academy Award, he announces to the world that his old high school teacher, Howard Brackett (Kevin Kline), is in fact a homosexual. Clearly, Cameron Drake, with his horrendous bleached tips and big mouth, is what the kids call a little shit.

Howard then spends all of his energy trying to convince news reporters, his students, his fiancée (Joan Cusack), and the world, that he’s just your typical American straight dude. Throughout Howard’s confusing journey, there are several cringey implications that male femininity equals bad and male masculinity equals good, which is harmful in terms of rigid gender stereotyping.

Lines like “truly manly men do not dance,” “you’re kinda prissy,” and “do I look like a homosexual?” may have aimed to be satirical (if we’re being optimistic), but ultimately failed. This kind of lazy, insensitive comedy is not as tolerated in this day and age.

However, if satire is done correctly, it can open up important conversations in a lighthearted, yet sophisticated fashion. Take it from Jamie Babbit’s 1999 rom-com But I’m a Cheerleader, whose bonkers approach to satire leaves the audience with a pleasant taste in their mouths, despite its so-so critical reviews.

With a campy abundance of pink and blue scenery, obvious John Waters-esque undertone (as mentioned by Roger Ebert), ridiculous Adam and Eve role-play as a wild form of gay conversion therapy, and infamous drag queen RuPaul Charles having been cast as a “re-programmer,” But I’m a Cheerleader is cemented in pop culture history as a queer cult classic.

Is it funny? Maybe. Is it silly? Absolutely. Is it hurtful? No, and that’s why it works in comparison to In & Out’s embarrassing reach in terms of comedic intelligence and political tact.

Charles Herman-Wurmfeld’s Kissing Jessica Stein laughably presents itself as one giant, raging stereotype that haunts the lives of queer women today. This quirky 2001 romcom showcases the story of a “straight” girl who has exhausted herself trying to find the perfect Prince Charming and decides to let her bi-curious side guide her.

The film’s opening scene drowns our frustrated, and unsure-of-herself leading lady, Jessica Stein (Jennifer Westfeldt), in heavy notes of heteronormativity, motherly shame, and strict religious boundaries, immediately making her conservative upbringing clear to the audience. Kissing Jessica Stein is saturated in other tired stereotypes, such as the feminine gay man with the lisp, the straight man’s love of fetishizing lesbian sex, and the artsy, spiritually free bisexual woman, who happens to be Jessica’s initial love interest, Helen Cooper (Heather Juergensen).

We could go on and on. What may even seem more outdated is the use of Jessica’s atrocious language when speaking of lesbian sex, and the “gross-out” factor that comes with it.

As much as these problematic aspects of the film may grind the gears of today’s activists (or just anyone with a basic understanding of storytelling), Kissing Jessica Stein is actually much smarter than its purposely-ridiculous outmost layer and dopey supporting characters. Jessica is an ignorant and high-strung woman with a lot to learn about the world and herself, with Helen opening the portal to Jessica’s journey of self-discovery and enlightenment.

But that’s not to say that this is Helen’s purpose, as she is in control of herself and is just as complex as Jessica; she’s just a bit worldlier. Watching Kissing Jessica Stein seventeen years since its release, it reads slightly as a spoof, but at least in an endearing and self-aware way, as it clearly meant no harm back in its day.

Unpacking the issues within Duncan Tucker’s Transamerica is quite the challenge, as we must consider the sociopolitical differences of 2005 as compared to 2018. Transamerica follows the emotional road-trip journey of a transgender woman, Bree, played by Felicity Huffman (yeah, yeah, we’ll get to that), getting to know the son (Kevin Zegers) she brought into the world 17 years ago.

Essentially, Transamerica is a family drama that doesn’t rely on the mystifying aspect of a transgender protagonist in the year 2005 (which is damn refreshing), but rather treats Bree as a multidimensional woman with issues outside of her gender identity. This is where Transamerica shines brightly (the film having scored two Academy Award nominations), only somewhat making up for its questionable casting.

Looking back on an episode of ABC’s The Mix, a Transamerica press interview with Huffman contains questions that now seem jarring to a more knowledgeable society. The interview consisted of outdated language, such as the use of the term “transsexual,” and inquired about the status of Huffman’s own vanity and self-esteem related to playing a male-to-female (MTF) transgender woman. Fortunately, in the words of Bob Dylan, “the times, they are a-changin’.”

Now let’s come back to 2018, a year when a cisgender woman is not completely welcome to portray a transgender character on the big screen. So we all know fabulous actor Scarlett Johansson. Good ol’ Scar Jo has got the acting chops and resume to tackle any role … that doesn’t mean that she should. Johansson has been under fire in the media a painful number of times for her portrayal of characters from marginalized groups in film.

i-D even published an article entitled “Why Can’t Scarlett Johansson Stop Being So Problematic?” which is chock-full of delicious memes targeting Johansson’s 2017 portrayal of Japanese character Motoko Kusanagi in Ghost in the Shell, based on the successful Japanese manga series, which originated in 1989. But let’s not forget the casting nightmare of summer 2018, which, due to immense online backlash from transgender actors and allies alike, caused Johansson to back out of her secured role as a transgender man in the recently announced film Rub & Tug.

Twitter, along with internet culture in general, tends to use humor, often in the form of a juicy meme, to release pain and speak out on injustices.

*Scarlet slowly begins placing the sombrero on her head*

In all fairness to Johansson, this was less prominent in 2005, leaving Huffman to be seen as “less problematic” in comparison. Let’s face it, though. No matter the year, diversity is not diversity without accurate representation; shall we say it again for the kids in the back?

A gorgeous, not to mention femme woman named Jasmine (Natalie Krill)—who seems to have it all, a killer job in the fashion world and a successful man at her side—lacks fulfillment. Everything changes when pushy, androgynous, and emotionally stifled roofer Dallas (Erika Linder), whose personal aesthetic seems to be a direct nod to queen of the lesbians, Kristen Stewart, stops at nothing to woo Jasmine.

A secret lesbian affair, painfully forced gender role implications, and a heavy focus on the female form give the audience a taste of a looming male presence. More specifically, the film is super NSFW, essentially presenting itself as a stretched out, porny version of the uncomfortable and controversial seven-minute sex scene in 2013’s Blue Is the Warmest Colour, lacking genuine emotional understanding or a fresh plot.

Perhaps it’s okay to enjoy films like this that refuse to challenge our understanding of LGBTQ+ relationships, as long as we acknowledge their sex-focused marketing tactics and fetishy undertones.

2016’s Macho is a Mexican film directed by Antonio Serrano, with a mind-blowing mess of a plot that’s so outdated and half-baked that you’d think it was birthed a quarter of a century ago. An overtly feminine and outrageously egotistical, renowned “gay” fashion designer worries his career is on the line when his true identity as a promiscuous straight man is revealed. Just in case you think you read that wrong, yes, this movie is about a closeted heterosexual man.

Our disappointing protagonist, Evaristo Jiménez (Miguel Rodarte), had decided to pose as a gay man in order to benefit his career in the high fashion world, using and betraying the LGBTQ+ community in the process. The idea of capitalizing on gay culture, or really the culture of any historically marginalized group, can be triggering to say the least, and is sort of unforgivable (Macho’s ghastly acting is also unforgivable).

In its defense, Macho is a comedy, but is seemingly negligent in moral undertone. Its weird ending almost appears to be a last-minute joke added in the editing process, but is probably the film’s last attempt at being somewhat progressive. What could’ve been a satire on the ideas of fragile masculinity and queerdom as a “trend” wound up being a plain ol’ mess.

Let’s not forget that two of the films on this list are from just two years ago (2016), showing that there is still work to be done in terms of queer representation in entertainment. Keep talking, keep tweeting, and keep meme-ing about the sociopolitical successes and failures in film, because as 2019 approaches, the future of LGBTQ+ cinema can still use all the help it can get.

Bianca Piazza is a film geek and writer who obsesses over extreme horror films, intelligent twist endings, LGBTQ+ content, and really any indie flick making noise on Twitter. Creepy-cute is her aesthetic and when she’s not boring someone with her film knowledge, she’s likely boring someone with her makeup industry knowledge. She tries not to be too pretentious. Give her a follow on Twitter where no one listens to her pop culture opinions: @biancamiss_