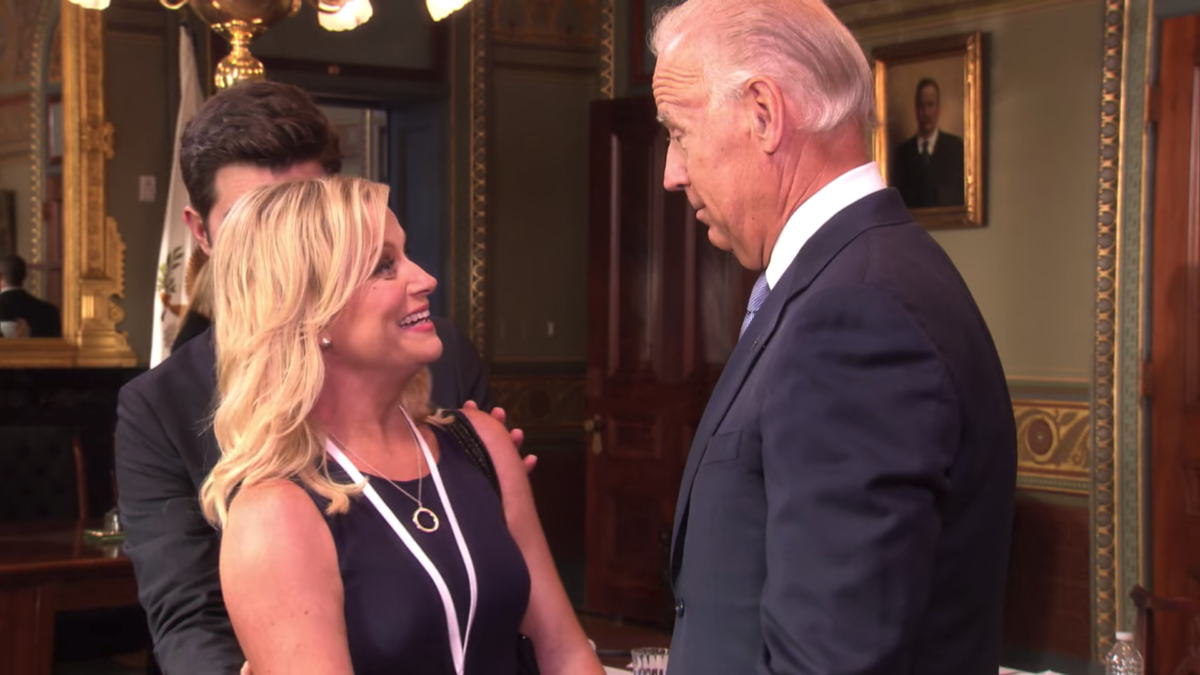 The 2020 election was a great deal different than the 2016 election in a lot of ways, but also, in this case, specifically for why we thought of Leslie Knope.

The Parks and Recreation character is often a beacon for fans of the show. I know that I personally turn to her and how she’d react to things to get me through the day, and in 2016, many wished they had Leslie to give them advice on what to do next. (And there were plenty of letters written about how she’d feel about Donald Trump winning.)

The 2020 election had us all talking about Leslie Knope for a different reason though: Her love of Joseph R. Biden.

Throughout all of Parks and Recreation, she’d sneak in pictures of Joe Biden, talk about how much she loved him, and Ben Wyatt knew that, if given the chance, he’d be thrown to the curb for the then vice president.

So, when I saw Leslie Knope trending on Saturday, after the announcement came that news networks were calling the presidential race for Joe Biden, I couldn’t help but get emotional. First, here is Leslie Knope getting to meet Biden, and honestly, her manic laughter? That was me realizing that we were finally free from Donald Trump.

Ben Wyatt was working for a congressman’s campaign when he decided to come back to Pawnee, Indiana and ask Leslie to marry him. But his engagement gift for Leslie? Meeting her hall pass.

But, much like Leslie Knope, I’m aware that our job isn’t over. We got Trump out of office, but there is still a lot of work that needs to be done in this country. Right now, we’re basically at zero. We were in the negatives with the Trump administration, and now we’re in the clear, but we have to start to build something better.

To make Leslie Knope completely proud, we won’t just sit back and celebrate the Biden/Harris win and be done with politics until the next upsetting thing happens. We’ll stay on top of things, stay diligent, and hold our government representatives accountable.

But for one brief moment, we got to celebrate in the joy that is the fact that we’re free from a Trump presidency, and we made him a one-term president.

Someone check on Leslie Knope pic.twitter.com/XWnxnO4KhB

Now though, work needs to be done. White women, we need to be talking to those women who went out and voted for Trump because it looks like the turnout of white female voters for Donald Trump increased in the 2020 election, and there is something incredibly wrong with that knowledge. We need to stay diligent in our political understanding, and we need to be watching the news just as we were to see what wild thing Trump tried to do next.

If you don’t want to do it for yourself or your fellow people (which we ALSO need to talk about), then do it for that love you have for Leslie Knope. Because she was a character who wanted to be the best person she could be, and that meant always staying involved and trying to do what was right for everyone.

So right now, celebrate. Be excited that Trump is a one-term president, and that Leslie Knope’s hall pass is heading back to the White House as president. But then, get ready to do the work as Leslie Knope would.

Now I know how Leslie Knope felt in this moment and I never want it to go away pic.twitter.com/rl7oRKcAqv