Tips For Checking Out The Leonid Meteor Shower This Weekend

Science, in your own backyard! Or rooftop, we're not picky. 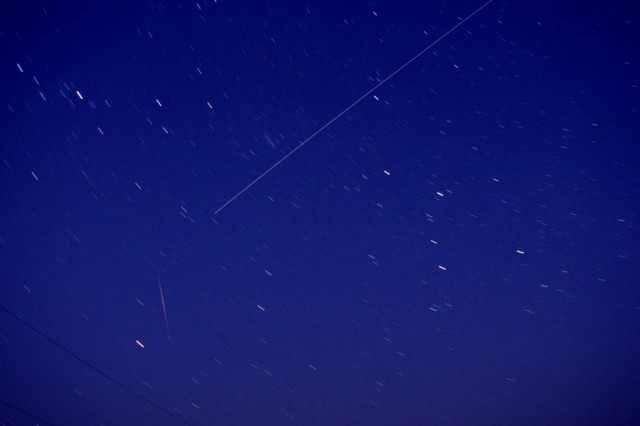 Every November, the Leonids rain down to Earth; but sadly, this year, the meteor shower is probably going to be more minimal than mind-blowing. Don’t give up hope, though; here are some tips on how to see some meteors this weekend!

Peaking late tonight into the early hours of Sunday morning, the 2013 Leonids won’t be anything like the famous meteor showers of Novembers past. Though in 1999, 2001, and 2012 we saw thousands of meteors per hour, this year we’re going to be meteor-blocked by the full moon, making it too bright to see much of anything in the sky.

That being said, you still might be able to catch about ten to twenty meteors per hour! Find a secluded spot to lay on your back, with little to no obstructions (like trees or buildings), and minimal light pollution. You’re more likely to catch the meteors after midnight, and they’ll be super-bright (due to the velocity with which they strike Earth’s atmosphere).

If you are watching tonight, here’s some Leonid facts you can impress your friends with: the Leonids are named for the constellation Leo because the meteors seems to originate from the direction of that star group. In actuality, the Leonids come from Comet Tempel-Tuttle, which pops through our neck of the galaxy every 33.3 years. When the comet gets close to the sun, it leaves some dust behind, which eventually falls to Earth as the Leonids.

(via Space.com, image via Robbie)