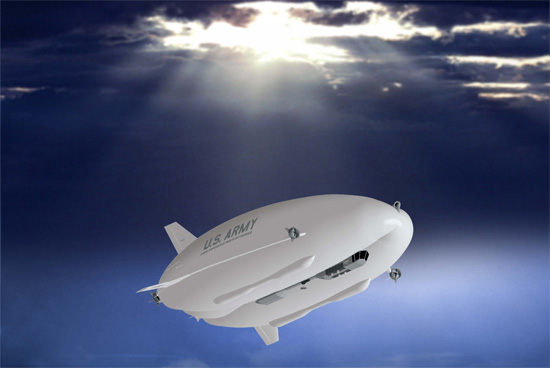 The U.S. Army has previously expressed interest in LEMVs, giant, optionally unmanned airships with formidable intelligence-gathering capabilities and the ability to hover at 20,000 feet for up to 3 weeks; now, they’ve signed a $517 million contract with defense industry manufacturer Northrop Grumman to build as many as three of them, to be deployed over Afghanistan by the end of 2011.

In its press release, Northrop Grumman describes the LEMVs as a valuable source of ISR [intelligence, surveillance, and reconnaissance], and as plugging into “the Army’s existing common ground station command centers and ground troops in forward operating bases.”

Space.com specs it out:

That represents a staying power for intelligence, surveillance, and reconnaissance over a longer period of time than what today’s robotic drones such as the Predator or Reaper can provide.

Despite its blimplike appearance, the LEMV is in fact a heavier-than-air vehicle; however, the lightweight gas it carries allows it to stay aloft longer per unit of fuel.