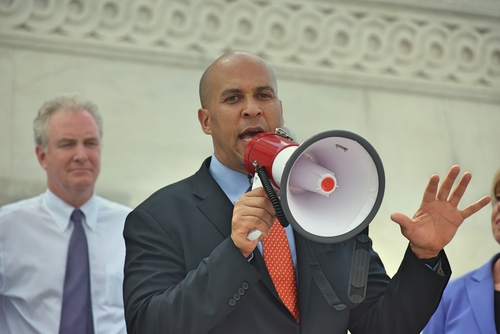 In a move that could potentially change the fates of many people who have been convicted of marijuana possession and use, Senator Cory Booker introduced new legislation that would legalize marijuana use on a national level. As it stands now, marijuana use is handled differently by each state, and where the federal government is involved, it’s still considered a Schedule 1 drug, which places it alongside substances like heroin, mescaline, MDMA (or ecstasy), GHB (the “date rape drug”), “bath salts,” and more. The legislation, which has been considered to be far-reaching by many, would remove marijuana from that list.

Legalizing marijuana on a national level is one thing, but what’s most incredibly notable about the bill is that its effects would be more or less retroactive, possibly expunging the records of people who have been previously convicted with marijuana-related crimes. This is a massive deal, as numerous statistics and studies have shown that people of color are more likely to be convicted of such crimes despite the fact that they share similar usage and possession rates with white people. Often times, people of color (Black people especially) are unfairly singled out and targeted by law enforcement—something to the tune of Black people being 3.73 times more likely to be arrested for marijuana possession, according to an ACLU report. As well as being retroactive in its legal effects, the new legislation would also direct federal funds towards the reformation of states’ laws regarding marijuana, hopefully changing things for the future.

Unsurprisingly, the legislation is likely going to see some fierce, heated resistance from other lawmakers, including Jeff Sessions, the current U.S. attorney general. Sessions has been criticized numerous times before for his racially-biased, anti-LGBTQIA, overly harsh directives and motivations. As attorney general, it’s likely that Sessions will do everything in his power to make sure that Booker’s legislation doesn’t come to pass.

What’s clear is that the criminal justice system is in need of some very serious reform in numerous ways, not the least of which is its racially discriminative practices around drug enforcement. While Booker’s new legislation might not make it as far as we’re all hoping, it is carrying the conversation a bit further both within and without the halls of the capitol. Rather than continuing the oft-used rhetoric of how legalization would bring in much needed funds (which it would, don’t get me wrong), it differentiates itself by centering the needs of those who are most hurt by unfair drug enforcement laws, namely people of color. Much of the discourse around legalizing pot revolves around money, which is fine, but in this way, it also neglects to talk about the very real, very human cost of discriminatory practices.

It’s high time we talked about how legalization intersects with our own identities and what that might mean for those who have already suffered because of its absence.