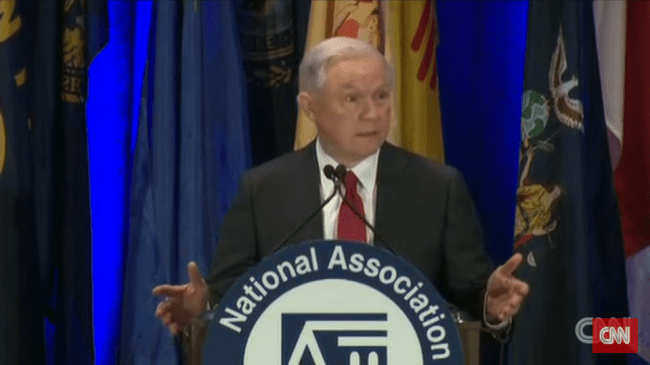 Attorney General Jeff Sessions recently issued an updated and terrible approach to sentencing, in a two-page memo sent to federal prosecutors across the United States. The new memo, counter to the popular and scholarly consensus on how to deal with crime, instructs prosecutors to “charge and pursue the most serious, readily provable offense.”

In a speech justifying the move, Sessions said, “I trust our prosecutors in the field to make good judgments. They deserve to be unhandcuffed and not micromanaged from Washington.” However, this memo does the opposite of that. “If prosecutors wish to pursue lesser charges for…low-level crimes,” explained NPR, “they will need to obtain approval for the exception from a U.S. attorney, assistant attorney general or another supervisor.” Sorry, what part of that sounds like independence and self-management? Sounds like micromanagement to me.

Under the previous Attorney General, Eric Holder, the federal recommendation was for prosecutors to avoid coming after non-violent drug offenders with heavier charges of the sort that carry a mandatory minimum sentence. Holder instructed prosecutors to avoid mandatory-minimum charges if the following four conditions, as written up by CNN, were met: “(a) the relevant conduct didn’t involve death, violence, a threat of violence or possession of a weapon; (b) the defendant wasn’t an organizer, leader or manager of others within a criminal organization; (c) there were no ties to large-scale drug trafficking operations; and (d) the defendant didn’t have a ‘significant’ criminal history (i.e., prior convictions).”

These changes reflected the growing consensus that mandatory minimums had impeded, rather than ensured, the course of justice in the United States. In particular, since mandatory minimum laws focus on the amount of drugs carried, rather than on the dealer’s position in the hierarchy/distribution line, these laws tended to over-penalize small-time dealers. If the point of a “War on Drugs” is to disrupt the supply chain for large gangs and cartels, thereby slowing the flow of drugs into the U.S., street-level, non-violent drug users and dealers are not the ones you want to lock up for decades.

After hearing about Sessions’ changes, Holder was scathing in his response. He said: “The policy announced today is not tough on crime. It is dumb on crime. It is an ideologically motivated, cookie-cutter approach that has only been proven to generate unfairly long sentences that are often applied indiscriminately and do little to achieve long-term public safety.”

You can read his entire, on-point statement in the tweet below:

Holder is 100% correct that, if your goal is to make a safer and stabler United States, this is indeed a “dumb” policy. Criminally, unforgivably so. However, if your goal is to increase the prison population for profit, tear apart minority families and communities, and recreate the failed War on Drugs, then this is a “smart” policy indeed.

When modern “tough-on-crime” and War on Drugs rhetoric began, the U.S. was at least experiencing a genuine rise in crime. Legislators from those eras are still responsible for the misery that these policies wrought – since they had plenty of warning from early critics, and many politicians weaponized these laws to racist ends – but it’s fair enough for them to claim relative ignorance of what their policies would cause. Today, though, there are no such excuses.

Today, crime has plummeted from its 1990s levels. Today, we know that mandatory minimum sentences lead to unjust, excessive, and cruel outcomes. And so anyone advocating for this kind of policy – the kind of policy that overcrowds prisons, tears apart families for no public benefit, and unfairly targets citizens of color – knows exactly what they’re doing. And what they’re doing is cruel, dangerous, and wrong.

(Via Washington Post and NPR; image via screengrab of Sessions’ previous speech on crime reduction)